Toward a Poetics of Witness: Apollinaire, Cendrars and the French Poets of the First World War 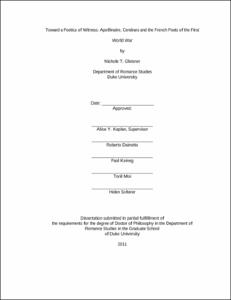 This dissertation addresses the lack of an identifiable group of World War I soldier-poets within the French literary and cultural canon. Through a study of archival matter from the period, including a survey of trench newspapers, contemporary print media, first editions, and material objects, the author concludes that one possible factor is the phenomenon of the democratization of the figure of the poet in the French trenches. The dissertation describes the groundbreaking rejection of the romantic definition of poetry as a sacred activity in favor of the view that poetry could be written by anyone, particularly those who served as witnesses on the front lines of experience. During the First World War, these common soldier-poets, later known broadly as témoins, were validated and encouraged from diverse places in French society: from the trenches where the soldiers' newspapers actively mobilized enlisted men to pick up a pen and write, to venerable institutions such as the Académie Française and Académie Goncourt which continually validated works by soldier-writers during the war years.

However, the democratization of the poet was not always openly received by established poets. Guillaume Apollinaire, who served as a soldier during First World War, struggled with how to redefine his role once he enlisted. Through close readings of a wide variety of his wartime writings, with a particular emphasis on Calligrammes (1918), the dissertation shows how this struggle dogged him until his death on November 9, 1918.

A second case is examined in the figure of Blaise Cendrars, who served in the French Foreign Legion during the war until he was seriously wounded. Through close readings of several fundamental postwar texts like La Guerre au Luxembourg (1916) and J'ai tué (1918) as well an examination of the film J'Accuse (1919), one sees how this poet resisted the idea that soldiers should become writers and how his renunciation of this double role became a crucial part of his personal mythology, helping to explain his mythologized disappearance from poetry in 1917 following the amputation of his right hand.

Through comparing the poetic careers of Apollinaire and Cendrars, two distinct responses to the question of how to witness the war emerge. Furthermore, the social phenomenon of the democratization of the poet in the trenches provides an essential backdrop to approaching wartime texts of witness, from both Apollinaire and Cendrars, as well as lesser-known writers such as René Dalize, Lucien Linais, Marc de Larreguy de Civrieux and Pierre Reverdy.