Planning to Avert a Crisis: Analysis of Jordan’s Groundwater Understanding its characteristics and providing solutions 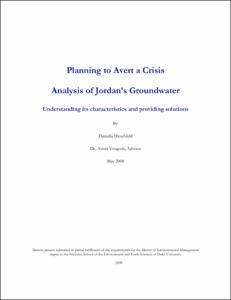 View / Download
12.9 Mb
Date
Author
Hirschfeld, Daniella
Advisor
Vengosh, Avner
Repository Usage Stats
295
views
406
downloads
Abstract
Jordan, with roughly 900 million m3 of renewable fresh water, is considered one of the ten most water deprived nations in the world. These water shortages, which are expected to be exacerbated by climate change, are considered to be a key impediment to the nation’s development. Currently the government plans to utilize the Disi aquifer, which can provide 90 million m3 of water for the next 100 years. Given the importance of this aquifer it is important to assess its quality. In this master’s project we analyze the Disi aquifer’s radium content and explore the implications from these findings. Specifically 22 samples from the aquifer were collected and compared to 38 samples from the rest of Jordan. The samples were analyzed both in terms of the chemical make up as well as their Ra content. Further analysis involved GIS mapping and some basic statistic. Finally work was done to assess the impact of our findings the nation’s water management plan. Our research shows that the Disi aquifer is heavily contaminated with radium, containing on average 9 times the US – EPA limit of 0.185 Bq/L. Furthermore, we find that there is a significant relationship between the aquifer’s radium content and the concentration of barium and chloride. Given these findings we conclude that only the confined saline group in the Disi aquifer would be safe to utilize for human consumption. If other waters are to be used, they must either be used after treatment, or only for agricultural purposes. Finally, we conclude with that finding that the radium content moves the Disi aquifer from a top choice water management strategy to a lower place in the rankings, but does not eliminate it as a choice all together.
Type
Master's project
Department
Nicholas School of the Environment and Earth Sciences
Subject
Jordan water management
Groundwater
Radionuclides
Permalink
https://hdl.handle.net/10161/571
Citation
Hirschfeld, Daniella (2008). Planning to Avert a Crisis: Analysis of Jordan’s Groundwater Understanding its characteristics and providing solutions. Master's project, Duke University. Retrieved from https://hdl.handle.net/10161/571.
Collections
More Info
Show full item record