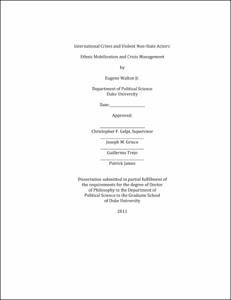 This dissertation explains the influence of ethnic non-state actors on the management of International Crises. I begin by arguing that when actively engaged in a crisis, ethnic actors contribute to; crisis violence, indecisive outcomes, and the escalation of interstate tensions. They do so because their more robust sponsorship allows them to drive relatively hard bargains with the state they are in conflict with. The analysis contributes to the development of theory by filling a gap in the literature and helping to resolve an important debate. Here I consider the entire population of non-state actors as a topic for analysis. This is in contrast to the general trend, which is to treat non-state actors as part of the landscape in studies that are otherwise concerned with ethnic conflict, terrorism or nation-building. In addition, the analysis here helps resolve a debate between bargaining theorist and ethnic conflict scholars concerning the relevance of ethnicity for our understanding of (both interstate and intrastate) conflict. In particular it identifies mechanisms specifically associated with ethnic rebel groups and demonstrates that ethnicity has an influence on interstate conflict through the actions of violent non-state actors. In the analysis I build on the logic above to develop a series of testable hypotheses. I then collect a new data-set of crisis-dyad-years and identify each crisis with a participating non-state actor (NSA-Crises) as well as those with ethnic non-state actors. Next I conduct a series of quantitative test of the relationship between ethnic actor participation and crisis management. The results demonstrate that ethnically mobilized rebel groups influence crises in unique ways, causing higher levels of violence and a higher incidence of stalemate. These findings are robust to various model specifications and the relationship between ethnic actors and crisis management is not conditioned by state-based sponsorship. I conclude with a discussion of the implications of this analysis for both theory and policy-making.