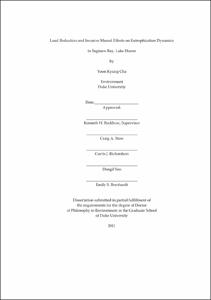 Phosphorus load reduction and dreissenid invasion are the two most important factors that influence europhication dynamics in the Great Lakes. The 1978 amendments to the Great Lakes Water Quality Agreement (GLWQA) between the United States and Canada established target phosphorus loads for the lakes, leading to reductions in external phosphorus loading to the Great Lakes. With diminished phosphorus levels, further nutrient management was a minor concern until the proliferation of invasive dreissenid mussels. Dreissenid mussels were first documented in the Laurentian Great Lakes in the late 1980s. Zebra mussels (<italic>Dreissena polymorpha</italic>) spread quickly into shallow, hard-substrate areas; quagga mussels (<italic>Dreissena rostriformis bugensis</italic>) spread more slowly and are currently colonizing deep, offshore areas. These mussels have the potential to modify biogeochemical processes and food web structure, altering nutrient cycling and availability. Following the mussel invasion, cyanobacterial blooms and nuisance benthic algal growth have reappeared in many nearshore areas of the Great Lakes.

This dissertation characterizes long-term patterns of phosphorus loading and mussel populations for Saginaw Bay, and estimates the effects of load reductions and dreissenid invasion on several aspects of pelagic water quality, focusing on phosphorus flux and cycling in Saginaw Bay. Bayesian approaches were used to quantify the impacts of load reduction and mussel invasion, while at the same time addressing model parameter uncertainty and prediction uncertainty associated with long-term observational data. Annual total phosphorus load estimates suggest a decreasing trend until the late 1970s to early 1980s, reflecting the effectiveness of point source controls implemented pursuant to GLWQA. Despite the decrease, however, the annual loads have not likely met the 440 tonne yr-1 target established for Saginaw Bay. In 1990 zebra mussels were discovered in the bay and by 1992 they were widespread and peaked with densities of >30,000 m<super>-2</super>. Following the peak, mean densities dropped and modeling results predict that the density will reach equilibria at ~600 m<super>-2</super>. When mussels appeared, the proportion of tributary phosphorus retained in Saginaw Bay increased from ~0.5 to ~0.7, reducing phosphorus export to the main body of Lake Huron. The combined effects of increased phosphorus retention and decreased phosphorus loading have caused an ~60% decrease in phosphorus export from Saginaw Bay to Lake Huron. The analysis of long-term patterns of pelagic water quality highlights the sustained effects of mussel invasion on altering water quality parameters in Saginaw Bay; there was a consistent decrease in chlorophyll concentrations by ~46%, and total phosphorus concentrations by ~25%, and an increase in secchi depths by ~15% over ~20 year invasion of mussels. A comparison of chlorophyll-phospohrus relationship between pre- and post-invasion periods suggest the reduced chlorophyll yield for a given phosphorus concentration after the mussel invasion. Further, decreases in both total phosphorus and chlorophyll concentrations were found in the majority of 24 mussel-invaded US lakes in addition to Saginaw Bay, and modeling results predict less chlorophyll yields per unit phosphorus level that ranges from oligo- to mesotrophic conditions. All lines of evidence presented in the dissertation point to the important roles of load reductions and invasive mussels affecting eutrophication dynamics in lake ecosystems.