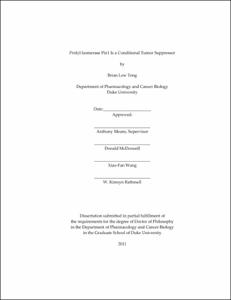 <p>Pin1 specifically binds to and catalyzes the cis-trans isomerization of phosphorylated-Ser/Thr-Pro motifs, which modulate the stability, localization, and function of numerous Pin1 substrates involved in cell cycle and tumorigenesis. During cell cycle progression, the timely synthesis and degradation of key regulatory proteins is required to maintain genomic integrity. Previously, we determined that Pin1 binds to and promotes the degradation of the oncoprotein c-Myc. Pin1 and the SCFCdc4 ubiquitin ligase recognize a &ldquo;phosphodegron&rdquo; sequence in c-Myc, which leads to its ubiquitination and degradation by the 26 S proteasome. Since cyclin E is another oncoprotein regulated by SCFCdc4, we hypothesized that Pin1 may also bind to and facilitate cyclin E turnover. Here we show that Pin1 binds to the cyclin E-Cdk2 complex in a manner that requires Ser384 of cyclin E, which is phosphorylated by Cdk2. The absence of Pin1 in mouse embryonic fibroblasts (MEFs) results in stabilization of cyclin E, and impairment of G1-S phase progression. Furthermore, deregulated cyclin E and c-Myc levels correlate with accelerated genomic instability in Pin1-/- MEFs, which results in sensitization of these cells to more aggressive Ras-dependent transformation and tumorigenesis.

<p>However, the role of Pin1 in cancer is controversial as it has been proposed to conditionally promote or suppress tumorigenesis depending on the genetic context. In human cancer, Pin1 protein levels are frequently altered in several cancers. Interestingly, the PIN1 gene is located on chromosome 19p13.2, which is a region subject to loss of heterozygosity in several tumors. Since Pin1 protein is frequently under-expressed in kidney cancer, we tested the hypothesis that it may have a tumor suppressive role in human clear cell renal cell carcinoma (ccRCC). Here we show evidence for PIN1 gene deletion and mRNA under-expression as a mechanism of Pin1 reduction in ccRCC tumors. We demonstrate that restoration of Pin1 in cell lines found to be deficient in Pin1 protein expression can attenuate the growth of ccRCC cells in soft agar and a xenograft tumor model. Moreover, this ability of Pin1 to negatively influence tumor growth in ccRCC cells may be dependent on the presence of functional p53, which is infrequently mutated in ccRCC. These observations suggest Pin1 may function as a conditional tumor suppressor.