Roles for Pin1 in Modulating Cells of the Innate Immune System 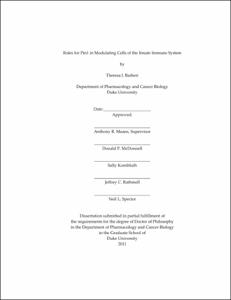 Pin1 is a ubiquitously expressed phosphorylation-specific prolyl isomerase that regulates substrate function by catalyzing the cis-trans isomerization of prolyl bonds. Through this modulation, Pin1 has been shown to influence the stability, localization, and/or activity of a diverse set of protein substrates that participate in a variety of cellular responses, such as cell cycle progression, modulation of cell stress, and apoptosis. In addition to extensive studies in non-hematopoietic cells, Pin1 has also been shown to regulate immune cell function. Indeed, Pin1 participates in germinal center B cell development and eosinophil granulocyte survival. It also facilitates cytokine production in T cells, eosinophil granulocytes, and plasmacytoid dendritic cells. Through specific activities such as these, Pin1 has been demonstrated to modulate responses to viral challenge, respiratory allergens, and organ transplantation.

Due to previously described functions of Pin1 in regulating cells of both the innate and adaptive immune system, we predicted that Pin1 would participate in systemic inflammatory responses. Upon inducing systemic inflammation in mice, we observed a profound reduction in circulating cytokine concentrations in Pin1-null mice compared to WT mice. This result prompted further investigations, which are described in chapter 3 and chapter 4 of this dissertation. In chapter 3, we evaluate the potential contribution of macrophages to the defects we observe in LPS-challenged Pin1-null mice. Using primary macrophages, bone marrow-derived macrophages, and MEF, we ultimately exclude a role for Pin1 in modulating LPS-induced production of pro-inflammatory cytokines in these cells. In chapter 4, we uncover a defect in the accumulation of conventional dendritic cells (cDC) in LPS-challenged Pin1-null mice. Upon more careful examination of spleen cDC subsets in Pin1-null mice, we discovered a defect in the CD8+ subset. Experiments described in this chapter collectively indicate a role for Pin1 in preferentially modulating late stages of development of the CD8+ subset of cDC. Consistent with such a defect, the expansion of adoptively transferred WT CD8+ T cells was less robust in Pin1-null mice than WT mice upon infection with the bacterium Listeria monocytogenes . At the end of chapter 4, we provide evidence that Pin1 facilitates the degradation of the hematopoietic transcription factor PU.1, and propose that deregulation of PU.1 expression may be one mechanism by which Pin1 modulates CD8+ cDC development. The work described in this dissertation began by evaluating a potential role for Pin1 in modulating pro-inflammatory cytokine production in macrophages; ultimately, however, we uncovered a novel role for Pin1 in preferentially modulating the development of the CD8+ subset of cDC. The results presented herein expand the current understanding of DC development and further implicate Pin1 as an important modulator of both innate and adaptive immune responses.