Re-Membering Redemption: Bearing Witness to the Transformation of Suffering 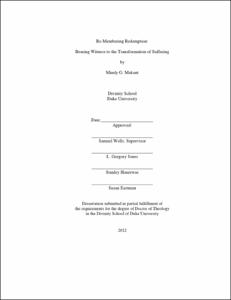 My subject is the redemption of profound suffering. I begin with the presumption that there is no suffering beyond the redemptive reach of God's grace. Drawing on insights from a number of academic disciplines, as well as on a wide variety of literary accounts of profound suffering, I consider the impact of the suffering of interpersonal violence on the formation of individual identity. I frame identity-formation in temporal terms, considering the impact of suffering in each temporal dimension: past, present, and future. In considering the past, I focus on the nature of memory, and argue that the memory of suffering resides in the body, soul, and mind, continually shaping the individual, and that a theological account of memory, therefore, cannot be reduced to cognitive recall. I also suggest that the integrity of the memory of suffering is often a casualty of suffering. In considering the present, I turn to an account of community which I argue is, likewise, an integral element of individual identity. I show the ways in which suffering, and the memory of suffering, continues to isolate those who have suffered. Next, I consider the future, and suggest that the anticipation of the future shapes both the memory of the past and the experience of the present. The memory of past suffering, I argue, threatens to obliterate the future in a way that can be devastating to present identity. I suggest that all three temporal dimensions are not only integral to identity but also embedded within one another. And I argue that, in light of the formative nature of suffering, the redemption of the individual necessarily includes the redemption of each temporal dimension. I suggest that there are specific ecclesial practices which develop habits of right vision, making this redemption evident such that the profound suffering of the past can be re-membered as a witness to God's redemption.