Leaning Both Ways at Once: Methodist Evangelistic Mission at the Intersection of Church and World 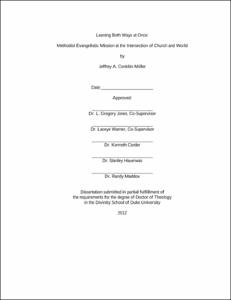 This dissertation suggests that a Methodist theology of evangelistic mission requires placement within an account of ecclesiology and the theological distinction of Church and world. It argues for a vision of the Church not as the environment for or instrument of evangelistic mission, but rather as a visible, practicing, and witnessing "People" in, but not of the world. Such a People appear as Christians engage both the practices of intra-ecclesial formation and extra-ecclesial engagement with the "other half of the reconciling event" in the world, at the same time, leaning both ways at once.

In this equipoise the Church pursues evangelistic mission along a path between ecclesial accommodation for the sake of cultural relevance in the world (understatement) on the one hand, and ecclesial self-absorption that locates witness in an aesthetic display of holiness to the world (overstatement) on the other. Constructively, I argue that the pursuit of this evangelistic mission along this paradoxical path is best envisioned as a practice of intercession. Intercession names the stance of the People of the Church between formation and mission, between tradition and innovation, between God and the world, leaning both ways at once. Throughout I argue that these concerns are not foreign to but stem from Methodist traditions of theology and practice and address a need in the contemporary United Methodist Church for deeper ecclesiological reflection and clarity regarding the shape of faithful evangelistic mission.

The argument begins in Chapter 1 with a review of several contemporary voices in Methodist theology of evangelism, considering the presence (or lack thereof) of the theological relationship of the Church and the world and identifying those who "understate" and those who "overstate" that relationship. In Chapter 2, I ask, "What is the agency of the world?" as a means to engage the lack of theological reflection on the formative influence of the principalities and powers in contemporary (understated) theologies of evangelism. Given the agency of the powers mediated through the example of the modern market-state, I argue for the crucial role of intra-ecclesial formation within contemporary Methodist theology of evangelistic mission. Anticipating the challenge that such a turn to formation tends to favor an overstated differentiation of Church and world, I turn in Chapter 3 to an engagement with John Howard Yoder and the Methodist tradition in order to answer the question: "What is the agency of the Church?" Resisting a reading of Yoder that locates the Church's agency for evangelistic mission in an (overstated) form of aesthetic witness offered to a watching world, I offer a reading of Yoder that locates ecclesial identity in a particular Peoplehood sent to the world to discern and name the alliances between Church and world that reveal the truth of God's reconciliation with the world through Christ. In the final two chapters, I seek to develop an account of Methodist ecclesial identity that "leans both ways" between being a "People called Methodist" formed by the practices of Wesley's General Rules (Chapter 4) and, at the same time, a People shaped via the evangelistic mission of intercession in the world, an image borrowed from the theological vision of Rowan Williams (Chapter 5).

Taken together, these chapters argue for a location of evangelistic mission in the Church as a Peoplehood, a politics constantly in formation, engaging the "other half of the reconciling event" and extending "unrestricted communion" as it serves an intercessory role, standing between God and the world. I conclude with reflection on the impact of such theological vision on the ecclesiology and missiology of the contemporary United Methodist Church in the United States, suggesting the expression of evangelistic mission in "intercessory ecclesial" terms as a guide to the development of new ecclesial communities, institutional expressions of Methodist connectional structuring, and extra-ecclesial partnerships for the sake of service and witness in the world.