We the People: Israel and the catholicity of Jesus 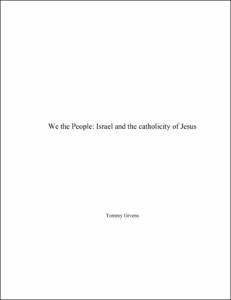 With the rise of the modern nation-state in recent centuries, "the people" has emerged as the most determinative concept of human community, the decisive imaginary for negotiating and producing human difference. It has become the primary basis for killing and the measure of life and death. John Howard Yoder sought to articulate the Christian political alternative in the face of the violence of modern peoplehood, a violence that cannot be understood apart from its anti-Jewishness. After expositing Yoder's account, I argue that it is inadequate insofar as it does not attend to God's election of Israel. I then trace the rise of modern peoplehood from "the West," particularly in the case of the people of the United States, in order to expose both the peculiarly Christian racism that has informed it and the key trope of "new Israel" for the imagination of political independence and exceptionalism. Following this historicization and analysis of modern peoplehood, I build critically on Karl Barth's account of the elect people of God in order to offer a Christian understanding that can subvert the violent, racist tendencies of modern political formations and embody a peaceable alternative in the midst of them. I sustantiate my Christian account of peoplehood as determined by God's election of Israel in Messiah with readings of key passages in the Tanakh/Old Testament, the Gospel of Matthew, and the Epistle to the Romans.