A Full-Frontal History of the Romanov Dynasty: Pictorial 'Political Pornography' in Pre-Reform Russia 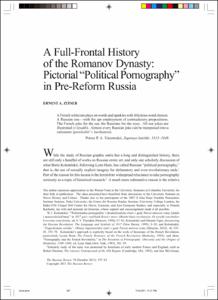 Files
Final proofs
31.3 Mb
About the Cover
104.2 Kb
Date
Author
Zitser, EA
Repository Usage Stats
1,135
views
828
downloads
Abstract
This profusely illustrated article expands the chronological and evidentiary basis of Boris Kolonitskii's argument about the role of scurrilous rumors and sexual innuendo in the desacralization of the Russian monarchy and demonstrates the complexity of the processes of reception, re-appropriation, and subversion of imperial “scenarios of power.” It does so by offering a close reading of what is arguably the earliest-known example of the genre of pictorial “political pornography” in Russia: a set of five, unique watercolors from the collection of the New York Public Library depicting eighteenth-century Russian emperors and empresses in flagrante delicto. The author presents evidence that suggests that this anonymous series of “folded” or “double pictures” (skladnye or dvoinye kartinki) was created in the first half of the nineteenth century by means of a subversive repurposing of Russian popular broadsheets, French revolutionary pornography, and official Russian royal portraiture. He argues that this artifact of male salon culture is the product of a deliberate attempt to create nothing less than an alternative, unexpurgated history of the House of Romanov: a sexually explicit, full-frontal assault that takes pleasure in exposing the “mysteries of state” that nineteenth-century royal apologists sought to conceal in official histories of the dynasty, which presented the children of Paul I and Maria Fedorovna as epigones of family values and models for the nation.
Type
Journal article
Subject
Russian History, Monarchy, House of Romanov, Desacralization, Visual Culture, Political Pornography, New York Public Library
Permalink
https://hdl.handle.net/10161/5734
Published Version (Please cite this version)
10.1111/j.1467-9434.2011.00629.x
Citation
ZITSER, E. A. (2011), A Full-Frontal History of the Romanov Dynasty: Pictorial “Political Pornography” in Pre-Reform Russia. The Russian Review, 70: 557–583.
Collections
More Info
Show full item record