The Vita of Prince Boris Ivanovich "Korybut"-Kurakin: Personal Life-Writing and Aristocratic Self-Fashioning at the Court of Peter the Great 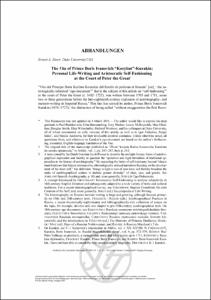 View / Download
879.9 Kb
Date
Author
Zitser, EA
Repository Usage Stats
619
views
1,240
downloads
Abstract
This article argues that the autobiographical "Vita del Principe Boris Korybut-Kurakin de la Familia de Polonia et Litoania," an astrologically-inflected, macaronic, personal chronicle of the life of one of the leading diplomats of Peter the Great, is not merely the first eighteenth-century Russian memoir, nor simply an eyewitness account of the reformist reign of Russia's first emperor. It also constitutes a unique, early modem "ego-document," which expresses how one extraordinary member of Muscovy's hereditary service elite understood and experienced the processes of "modernization" and "secularization" that were the hallmarks of Peter's "cultural revolution." Kurakin's Vita not only enriches our understanding of these long-term cultural processes, but also offers an unprecedented opportunity to examine them from the inside-out, so to speak, that is, from the point of view of a member of a social group (dvorianstvo or shliakhetstvo) frequently depicted as a blank slate upon which a reforming tsar and faceless historical forces left their indelible marks. In Kurakin's case, these marks included not only the prominently-displayed insignia of the chivalrous Order of St. Andrew, or the cravat and periwig that he sported in his personally-commissioned, engraved portrait (1717), but also the oozing, "scorbutic" sores and "melancholic" thoughts concealed in plain sight among all these fashionable trappings of worldly success, like the anamorphic death's head in Hans Holbein's "The Ambassadors" (1533). Indeed, from a certain angle of vision, Kurakin's complaints can be seen as psychosomatic manifestations of a disaffected courtier's desperate and, ultimately, not unsuccessful attempt to use all the tools at his disposal - including practices associated with such arcane and esoteric fields of knowledge as iatromathematics and balneology - to reconcile his astrological 'complexion' with his professional aspirations, and thereby to take control of his own fate. From this perspective, Kurakin's personal "book of nativity" (kniga rozhdeniia or libro della mia nascita) constitutes not only an act of self-justification (designed to counter the impression that its author was a shirker of duty), but also of aristocratic 'self-fashioning.'
Type
Journal article
Subject
Russian History, Autobiography, Ego-Document, Self-Fashioning, Astrology, Peter the Great, Muscovy, Prince B. I. Kurakin
Permalink
https://hdl.handle.net/10161/5735
Citation
Zitser, Ernest A. The Vita of Prince Boris Ivanovich "Korybut"-Kurakin. Personal Life-Writing and Aristocratic Self-Fashioning at the Court of Peter the Great. Jahrbücher für Geschichte Osteuropas. Neue Folge. Band 59, Heft 2 (2011): 163-194.
Collections
More Info
Show full item record