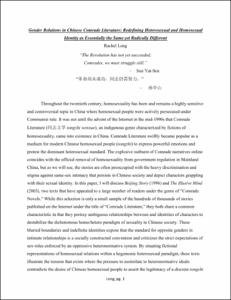 View / Download
487.7 Kb
Date
Author
Leng, Rachel
Repository Usage Stats
1,123
views
1,982
downloads
Abstract
Throughout the twentieth century, homosexuality has been and remains a highly sensitive and controversial topic in China where homosexual people were actively persecuted under Communist rule. It was not until the advent of the Internet in the mid-1990s that Comrade Literature (同志文学 tongzhi wenxue), an indigenous genre characterized by fictions of homosexuality, came into existence in China. Comrade Literature swiftly became popular as a medium for modern Chinese homosexual people (tongzhi) to express powerful emotions and protest the dominant heterosexual standard. This paper will discuss Beijing Story (1996) and The Illusive Mind (2003), two texts that have appealed to a large number of readers under the genre of “Comrade Novels.” Both fictions share a common characteristic in that they portray ambiguous relationships between and identities of characters to destabilize the dichotomous homo/hetero paradigm of sexuality in Chinese society. These Comrade novels comment on issues of sexuality and repressive social practices in two distinct but interrelated ways: as a plea for others to understand that homoerotic desire is essentially the same as heteroerotic desire, but also as an affirmation of the legitimacy of homosexual relations as radically different and even more ideal than dominant heterosexual practices in Chinese society. By examining the sexual and emotional attachment of the male protagonist to his male and female subjects of desire in these Comrade texts, I will explore how these differing viewpoints simultaneously coexist yet contest each other. I posit that it is possible to borrow from Western queer theory to understand the emergence and logic of Comrade Literature in China, demonstrating that queer texts converge across national and cultural borders in the way they challenge the dominant heteronormative categorical order of sexual hierarchy. Nonetheless, Comrade novels still exhibit divergence from texts produced in the Euro-American milieu to address dilemmas specific to tongzhi in China’s sociopolitical environment.
Description
Written for an AMES Independent Study course under Professor Rojas, to be worked into an honors thesis. Winner of the 2012 Robert F. Durden Prize.
Type
Course paper
Subject
LGBT
Homosexuality
Literature
China
Sexuality
Comrade
Queer Theory
Permalink
https://hdl.handle.net/10161/5751
Citation
Leng, Rachel (2012). Gender Relations in Chinese Comrade Literature: Redefining Heterosexual and Homosexual Identity as Essentially the Same yet Radically Different. Course paper, Duke University. Retrieved from https://hdl.handle.net/10161/5751.
Collections
More Info
Show full item record