Making History or Celebrating Change? The Role of Twitter in the 2011 Egyptian Revolution 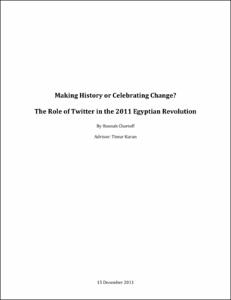 View / Download
1.0 Mb
Date
Author
Chartoff, Hannah
Repository Usage Stats
363
views
1,417
downloads
Abstract
The Egyptian Revolution of 2011 and the popular protest movement that led to its success represent a significant departure from recent Egyptian history. Plagued by an authoritarian government and weak civil society, the Egyptian population as a whole had little incentive to risk openly opposing the government and demanding change. This paper forwards a model of how such an unexpected revolution might occur, then demonstrates how social media outlets like Twitter can assist in drawing protesters to the streets. The paper then examines the flow of information posted to Twitter during the Egyptian revolution by tracing the number of times key protesters were “retweeted” over time. Though social media is shown to have the potential to facilitate revolution, the data from January and February 2011 in Egypt suggest that Twitter in this case served as an expression of protesters’ sentiments as the revolution occurred, rather than as a force motivating the revolution; that is, the 2011 Egyptian protesters used Twitter to celebrate and document their success, not to make history or plan protests.
Type
Honors thesis
Department
Political Science
Subject
Arab Spring
Egypt
Revolution
Twitter
Social media
Permalink
https://hdl.handle.net/10161/5754
Citation
Chartoff, Hannah (2012). Making History or Celebrating Change? The Role of Twitter in the 2011 Egyptian Revolution. Honors thesis, Duke University. Retrieved from https://hdl.handle.net/10161/5754.
Collections
More Info
Show full item record