From Population to Single Cells: Deconvolution of Cell-cycle Dynamics 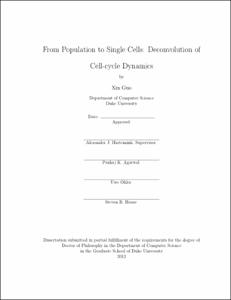 The cell cycle is one of the fundamental processes in all living organisms, and all cells arise from the division of existing cells. To better understand the regulation of the cell cycle, synchrony experiments are widely used to monitor cellular dynamics during this process. In such experiments, a large population of cells is generally arrested or selected at one stage of the cycle, and then released to progress through subsequent division stages. Measurements are then taken in this population at a variety of time points after release to provide insight into the dynamics of the cell cycle. However, due to cell-to-cell variability and asymmetric cell division, cells in a synchronized population lose synchrony over time. As a result, the time-series measurements from the synchronized cell populations do not accurately reflect the underlying dynamics of cell-cycle processes.

In this thesis, we introduce a deconvolution algorithm that learns a more accurate view of cell-cycle dynamics, free from the convolution effects associated with imperfect cell synchronization. Through wavelet-basis regularization, our method sharpens signal without sharpening noise, and can remarkably increase both the dynamic range and the temporal resolution of time-series data. Though it can be applied to any such data, we demonstrate the utility of our method by applying it to a recent cell-cycle transcription time course in the eukaryote <italic>Saccharomyces cerevisiae</italic>. We show that our method more sensitively detects cell-cycle-regulated transcription, and reveals subtle timing differences that are masked in the original population measurements. Our algorithm also explicitly learns distinct transcription programs for both mother and daughter cells, enabling us to identify 82 genes transcribed almost entirely in the early G1 in a daughter-specific manner.