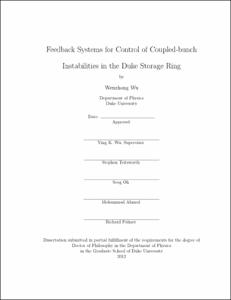 The Duke storage has been developed as a dedicated driver for the storage ring based free-electron lasers (FEL) and a high flux Compton gamma-ray source, the High Intensity Gamma-ray Source. The storage ring can be operated from about 250 MeV to 1.2 GeV, which can produces FEL lasers over a wide range of wavelengths and gamma-rays with a tunable energy from 1 MeV to 100 MeV. The Duke light source facility conducts world-class researches across a wide range of scientific disciplines and technological applications.

In a storage ring, beam instabilities can cause a signifcant degradation in machine performance. In the Duke storage ring, coupled-bunch instabilities (CBIs) are the main source which limit ultimately achievable beam current in multi-bunch operations. In order to to suppress CBIs in the Duke storage, we developed a bunch-bybunch longitudinal feedback (LFB) system which is based on a field programmable gate array (FPGA) embedded system. During the design and implementation of the LFB system, several novel methods and techniques are developed in numerical analysis of feedback control and kicker cavity design/fabrication. High current are realized at low energies by using the LFB system. In addition, after the successful commissioning of the LFB system, a analog transverse feedback (TFB) system has been upgraded to a digital one using the same technique as the LFB system.

The LFB system has been routinely operated for HIGS. Additional,the LFB and TFB feedback systems become an useful diagnostic tools in researches of electron beam dynamics, FEL lasing process, and background of HIGS. The control of CIBs in different operation modes are studied using the feedback system. Furthermore, based on the TFB system, a novel bunch cleaning method has been developed to reduce the background of gamma-ray.