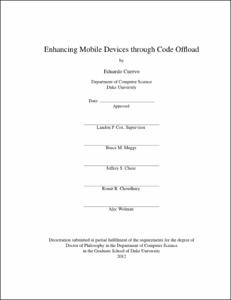 Advances in mobile hardware and operating systems have made mobile a first-class development platform. Activities such as web browsing, casual game play, media playback, and document reading are now as common on mobile devices as on full-sized desktop systems. However, developers are still constrained by the inherent resource limitations of mobile devices. Unlike desktop systems, mobile devices must sacrifice performance to accomodate smaller form factors and battery-backed operation. Opportunistic offloading of computation from a mobile device to remote server infrastructure (i.e., "code offload") offers a promising way to overcome these constraints and to expand the set of applications

Deciding to offload requires a careful consideration of the costs and benefits of a range of possible program partitions. This cost-benefit analysis depends on external factors, such as network conditions and the resources availability, as well as internal app properties, such as component dependencies, data representations, and code complexity. Thus, benefiting from offload requires some assistance from developers, but requiring developers to adopt arcane or unnatural programming models will hinder adoption of regardless of the potential benefits.

In this dissertation we characterize two frameworks that reduce the amount of developer effort required to improve the performance of mobile apps through code offload. The first, MAUI, is designed for computationally intensive general-purpose apps such as speech

and facial recognition. The second, Kahawai, is designed for graphics-intensive apps like fast-action video games.

MAUI continuously monitors the device, network, and app, and uses its measurements to compute an energy-efficient program partition. MAUI reduces the burden on developers by taking advantage of core features of the managed code environments common to mobile

platforms: code portability, serialization, reflection, and type safety. These features allows MAUI to automatically instrument and potentially offload methods that the developer has tagged as suitable for offload. MAUI is particularly effective on applications composed by operations whose computational cost is large compared to the transfer cost of their input parameters and their output results.

Kahawai is designed for graphics-intensive apps such as console-style games and takes advantage of two features of today's mobile gaming platforms: capable mobile GPUs and reusable game engines. Even though today's mobile devices cannot duplicate the sophisticated graphical detail provided by gaming consoles and high-end desktop GPUs, devices have seen rapid improvements in their GPU processing capabilities. Kahawai leverages a device's GPU to provide collaborative rendering. Collaborative rendering relies on a mobile GPU to generate low-fidelity output, which when combined with server-side GPU output allows a mobile device to display a high-fidelity result. The benefits of collaborative rendering are substantial: mobile clients can experience high-quality graphical output using relatively little bandwidth. Fortunately, because most modern games are built on top of reusable game engines, developers only have to identify the sources of non-determinism

in the game logic to take advantage collaborative rendering.

Together, MAUI and Kahawai demonstrate that code offload can provide substantial benefits for mobile apps without overburdening app developers.