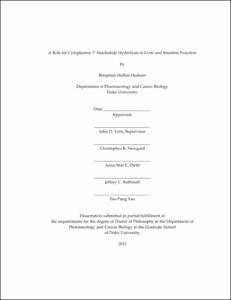 Bisphosphate 3'-nucleotidase (Bpnt1) is a member of a family of small molecule phosphatases whose activities depend on divalent cations and are inhibited by lithium. While the enzymes share many commonalities, they have distinct and non-­overlapping substrate pools. Of the seven mammalian members, two enzymes, gPAPP and Bpnt1, hydrolyze the same small molecule 3'-phosphoadenosine 5'-phosphate (PAP) but act in separate subcellular compartments, the Golgi apparatus and cytoplasm respectively. Hydrolysis of PAP, which is a metabolite of the inorganic sulfate incorporation pathway, is highly conserved throughout evolution from bacteria to yeast to humans. Evidence in multiple species has shown that inhibiting PAP hydrolysis leads to cellular toxicity as a result of its accumulation and also that these effects can be ameliorated by modulating the rate of its production. However, despite the abundant evidence of its importance

from studies in lower eukaryotes, the role of the cytoplasmic PAP phosphatase, Bpnt1, in more complicated mammalian physiological remains poorly understood. Here we report for the first time the generation and characterization of mice deficient for Bpnt1. Bpnt1 null mice do not exhibit skeletal defects, but instead develop severe liver

pathologies and deficiencies in intestinal iron absorption. Loss of Bpnt1 leads to tissue-specific elevations of the substrate PAP. To test the hypothesis that a toxic cellular accumulation of PAP accounts for the observed phenotypes, we generated a double mutant mouse that concomitantly down regulates bisphosphorylated nucleotide synthesis in the context of Bpnt1 deficiency. Remarkably, double mutants do not display any detectable physiological defects seen in Bpnt1 null mice. In addition, we have identified and characterized a novel substrate of 3'­nucleotidases, 3'-phosphoadenosine 5'-diphosphate (PAPP) that co-accumulates with PAPS and PAP and might play a role in mediating certain aspects of the physiological defects of Bpnt1 null mice. Overall, our study defines a role for Bpnt1 in mammalian physiology and provides mechanistic insights into the importance of cytoplasmic 3'-­