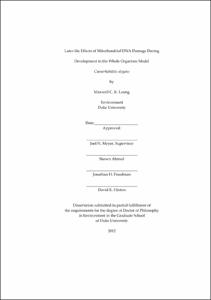 Early life exposure to mitochondrial toxicants, including paraquat, rotenone, and manganese, has been hypothesized to promote early onset of genetic mitochondrial disorders as well as common degenerative diseases such as Parkinson's Disease and Alzheimer's Disease. This dissertation aimed to investigate the biochemical and physiological effects of early life exposure to mitochondrial genotoxicants during development in the whole organism modelC. elegans. In the first experiment, a panel of model mammalian neurotoxicants and heavy metal ions was screened for mitochondrial genotoxicity by measuring mitochondrial DNA (mtDNA) copy number and damage in C. elegans. Exposures to paraquat, cumene hydroperoxide, rotenone, maneb, cadmium (II) chloride, and manganese (II) chloride have no significant effect on the mtDNA : nuclear DNA (nuDNA) ratio; only exposure to paraquat resulted in higher mtDNA than nuDNA damage level.In the second experiment, a laboratory method was developed to generate persistent mtDNA damage in larval C. elegans using serial ultraviolent C (UVC) exposures. While the mitochondrial DNA damage persisted from L1 to L4 stage, there was no difference between mitochondrial copy number of the control and UVC treated worms. The UVC treatment significantly inhibited both ATP level and oxygen consumption 24 and 48 hr after the exposure, while the mitochondrial mRNA expression was inhibited 3 hr after the exposure. The pink-1 mutation, a mitochondrial serine/threonine-protein kinase involved in the mitophagy process, appeared to limit the growth inhibitory effect of UVC treatment and increase the mitochondrial DNA content of the organism. In the third experiment,larval C. elegans was exposed to UVC and paraquat and examined using differential interference contrast and fluorescence confocal microscopy. Both resulted in detectable, dose-dependent lesions in dopaminergic CEP neurons in adult C. elegans. Neither significant lesions in the GABAergic dorsal nerve cord nor any sign of pharyngeal necrosis were detected. This work demonstrated a mechanism in which early life exposure to mitochondrial genotoxicants could result in both biochemical and physiological changes in later stages of life, thereby highlighting the potential health hazard of time-delayed effects of these chemicals in the environment.