The Role of Erythrocytic miRNA in the lifecycle of Plasmodium falciparum 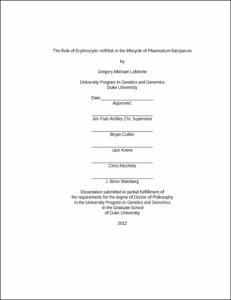 Malaria, caused by the apicomplexan parasite Plasmodium, is a disease which affects up to 500 million people each year. Historically, malaria infection has been combated both through the control of its vector, the Anopheles mosquito, and use of a variety of drugs, such as quinine (1800s) and chloroquine (1900s). However, with the evolution of resistance to the majority of available anti-malarial drugs, current approaches have settled upon combinatorial therapies. The most effective of these currently are ACTs (Artemisinin Combination Therapies - Artemisinin derivatives combined with a number of other drugs). However reports of Artemisinin resistance are continuing to emerge, suggesting that new approaches and increased understanding of the Plasmodium parasite is required.

Beginning with the complete sequencing of Plasmodium falciparum genome and continuing with comprehensive profiling of both the parasite's proteome and transcriptome, various genomic approaches applied in the study of malaria have led to significant new insights into the underlying biology of this parasite. While these new findings have greatly increased our understanding of genetic regulation within the malaria parasite, they largely have not yet translated into new therapeutic approaches. For this reason, considerable attention has been paid to the study of human genetic disorders which convey resistance to malaria, in the hopes that elucidating the mechanisms behind these resistances might lead to increased understanding of the parasite's biology and thus novel therapeutic approaches.

Sickle cell (HbS) erythrocytes are well known to resist malaria infection. However, the molecular basis of this resistance, long been recognized as multifactorial, contains elements which remain poorly understood. Here we show that the dysregulated erythrocytic microRNA composition, present in both HbAS and HbSS erythrocytes, is a significant determinant of resistance against the malaria parasite Plasmodium falciparum. During the intraerythrocytic lifecycle of P. falciparum, a subset of erythrocyte microRNAs translocate into the parasite. Two microRNAs, miR-451 and let-7i, were highly enriched in HbAS and HbSS erythrocytes and these miRNAs, along with miR-223, negatively regulated parasite growth. Surprisingly, we found that miR-451 and let-7i integrated into essential parasite mRNAs and, via impaired ribosomal loading, resulted in translational inhibition of the target mRNA. Hence, sickle cell erythrocytes exhibit cell-intrinsic resistance to malaria in part through an atypical microRNA activity which may present a novel host defense strategy against complex eukaryotic pathogens. In addition, the formation of these chimeric transcripts even in normal host erythrocytes illustrates a unique parasitic post-transcriptional adaptation to the host-cell environment.