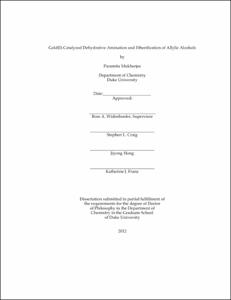 Allylic amines are important and fundamental building blocks due to their wide-spread occurrence in many natural products and the ability to further functionalize them by transformations on the double bond to generate a diverse range of compounds. Transition-metal catalyzed allylic substitution represents an attractive and efficient approach towards the synthesis of these allylic amines. However, limitations associated with the traditional methods developed for such allylic amination in terms of regiospecificity, atom economy and generality in these transformations, combined with the importance of allylic amination, prompted us to develop novel atom efficient and regiospecific methods for their synthesis.

A 1:1 mixture of AuCl[P(<italic>t</italic>-Bu)2<italic>o</italic>-biphenyl] (5 mol %) and AgSbF6 (5 mol %) catalyzed the intermolecular amination of underivatized allylic alcohols with 1-methyl-2-imidazolidinone and related nucleophiles. The first examples of intermolecular allylic amination was developed that in the case of gamma-unsubstituted and gamma-methyl-substituted allylic alcohols, occurred with high gamma-regioselectivity and <italic>syn</italic>-stereoselectivity.

A 1:1 mixture of AuCl[P(<italic>t</italic>-Bu)2<italic>o</italic>-biphenyl] (5 mol %) and AgSbF6 (5 mol %) also served as a very efficient catalytic system for the intramolecular amination of allylic alcohols with alkylamines to form substituted pyrrolidine and piperidine derivatives. The protocol was effective for a range of secondary as well as primary alkylamines as nucleophiles with different substitutions on the alkyl chain tethering the nucleophile to the allylic alcohol. The method was also extended towards the total synthesis of the naturally occurring alkaloid (S)-(+)-coniine in two steps from the starting (R,Z)-8-(N-benzylamino)-3-octen-2-ol. In addition, gold(I)-catalyzed cyclization of (R,Z)-8-(N-benzylamino)-3-octen-2-ol (96% ee) led to isolation of (R,E)-1-benzyl-2-(1-propenyl)piperidine in 99% yield and 96% ee that established the net syn-addition of the nucleophile with respect to the departing hydroxyl group.

A bis(gold) phosphine complex (S)-Au2Cl2(DTBM-MeOBIPHEP) (2.5 mol %) and AgClO4 (5 mol %) catalyzed the intramolecular enantioselective dehydrative amination of allylic alcohols with carbamates to form the corresponding substituted pyrrolidines, piperidines, morpholines and piperazines in excellent yields and with up to 95% ee. This general and effective protocol tolerated a range of carbamates as well as sulfonamides as nucleophiles. Cyclization of chiral amino allylic alcohols that possessed a stereogenic homoallylic or hydroxy-bound carbon atom occurred with an overriding catalyst control of asymmetric induction. In addition, stereochemical analysis of the cyclization of a chiral non-racemic secondary allylic alcohol established the net syn-displacement of the hydroxy group by the carbamate nucleophile.

Alongside allylic amination, a cationic gold(I)-N-heteocyclic carbene complex catalyzed the intermolecular etherification (alkoxylation) of allylic alcohols in a regiospecific and syn-stereoselective fashion. The transformation was highly efficient to utilize unactivated primary and secondary alcohols as nucleophiles with different allylic alcohols to undergo regiospecific etherification. Employment of a chiral nonracemic secondary allylic alcohol, trans-5-(benzyloxy)pent-3-en-2-ol (98% ee) showed a high level of chirality transfer on reaction with n-butanol to the corresponding allylic ether, (2-butoxypent-3-en-1-yloxy)methylbenzene (97% ee) and established the net syn-addition of the alcohol nucleophile with respect to the departing hydroxyl group of the allylic alcohol.