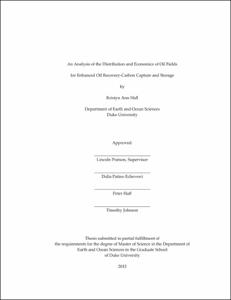 The rising carbon dioxide emissions contributing to climate change has lead to the examination of potential ways to mitigate the environmental impact. One such method is through the geological sequestration of carbon (CCS). Although there are several different forms of geological sequestration (i.e. Saline Aquifers, Oil and Gas Reservoirs, Unminable Coal Seams) the current projects are just initiating the large scale-testing phase. The lead entry point into CCS projects is to combine the sequestration with enhanced oil recovery (EOR) due to the improved economic model as a result of the oil recovery and the pre-existing knowledge of the geological structures. The potential scope of CCS-EOR projects throughout the continental United States in terms of a systematic examination of individual reservoir storage potential has not been examined. Instead the majority of the research completed has centered on either estimating the total United States storage potential or the potential of a single specific reservoir.

The purpose of this paper is to examine the relationship between oil recovery, carbon dioxide storage and cost during CCS-EOR. The characteristics of the oil and gas reservoirs examined in this study from the Nehring Oil and Gas Database were used in the CCS-EOR model developed by Sean McCoy to estimate the lifting and storage costs of the different reservoirs throughout the continental United States. This allows for an examination of both technical and financial viability of CCS-EOR as an intermediate step for future CCS projects in other geological formations.

One option for mitigating climate change is to store industrial CO2 emissions in geologic reservoirs as part of a process known as carbon capture and storage (CCS). There is general consensus that large-scale deployment of CCS would best be initiated by combining geologic sequestration with enhanced oil recovery (EOR), which can use CO2 to improve production from declining oil fields. Revenues from the produced oil could help offset the current high costs of CCS.

The cumulative potential of CCS-EOR in the continental U.S. has been evaluated in terms of both CO2 storage capacity and additional oil production. This thesis examines the same potential, but on a reservoir-by-reservoir basis. Reservoir properties from the Nehring Oil and Gas Database are used as inputs to a CCS-EOR model developed by McCoy (YR) to estimate the storage capacity, oil production and CCS-EOR costs for over 10,000 oil reservoirs located throughout the continental United States.

We find that 86% of the reservoirs could store &#8804;1 y or CO2 emissions from a single 500 MW coal-fired power plant (i.e., 3 Mtons CO2). Less than 1% of the reservoirs, on the other hand, appear capable of storing &#8805;30 y of CO2 emissions from a 500 MW plan. But these larger reservoirs are also estimated to contain 48% of the predicted additional oil that could be produced through CCS-EOR. The McCoy model also predicts that the reservoirs will on average produce 4.5 bbl of oil for each ton of sequestered CO2, a ratio known as the utilization factor. This utilization factor is 1.5 times higher that arrived at by the U.S. Department of Energy, and leads to a cumulative production of oil for all the reservoirs examined of ~183 billion barrels along with a cumulative storage capacity of 41 Mtons CO2. This is equivalent to 26.5 y of current oil consumption by the nation, and 8.5 y of current coal plant emissions.