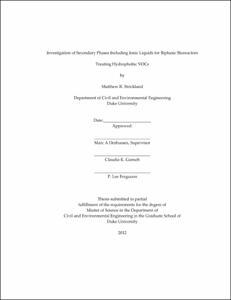 Volatile organic compounds (VOCs) are a family of chemicals which are known to have adverse effects on climate change and health, and thus emissions of VOCs are regulated. One such control method is via biodegradation in a biofilter and other similar reactors. Many hydrophobic VOCs, however, are difficult to degrade in such devices. Biphasic bioreactors are designed to remove and treat hydrophobic compounds from waste gas streams. In addition to the water phase, a biphasic bioreactor includes a secondary (2°) liquid phase where hydrophobic VOCs are absorbed and made available for degradation by bacteria. A viable 2° phase is non-miscible with water, non-toxic to bacteria in the bioreactor, and has a strong affinity for target pollutants. In this work, methods were explored by which candidate 2° phases may be screened for suitability to treat two commonly studied hydrophobic VOCs, toluene and hexane. 2° phases included the commonly used silicone oil, paraffin oil and several ionic liquids (ILs), a novel type of solvent popular with the chemical industry. The air-liquid partition coefficient of toluene and hexane with each 2° phases was determined. Additionally the effect on the oxygen uptake rate (OUR) and cell growth in a flask of each 2° phase on biological cultures enriched on toluene and hexane was studied. It was determined that OUR is a poor method of screening 2° phases for biophasic bioreactors. Additionally, cell growth studies failed to capture accelerated degradation of the target pollutants in biphasic cultures. The presence of ILs resulted in significant biological inhibition, and thus do not appear to be promising 2° phase candidates for biodegradation purposes.