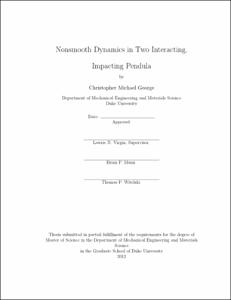 This thesis reviews the experimental investigation of a non-smooth dynamical system consisting of two pendula; a large pendulum attached to a frame with an impact wall, and a small pendulum, which shares its axis of rotation with the large pendulum and can impact against the large pendulum. The system is forced with a sinusoidal horizontal motion, and due to the nonlinearities present in pendula as well as the discontinuous forcing from impacts, exhibits a wide range of behavior. Periodic, quasi-periodic, and chaotic responses all are possible, hysteresis is present, and grazing bifurcations allow for spontaneous change of behavior and the appearance of chaotic responses without following a traditional route to chaos. This thesis follows from existing non-linear dynamics research on forced pendula, impacting systems (such as a bouncing ball) and doubly impacting systems (ball bouncing on top of a bouncing ball).