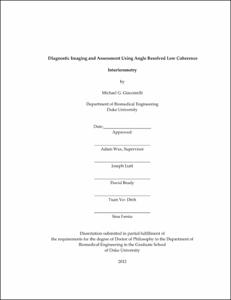 The redistribution of incident light into scattered fields ultimately limits the ability to image into biological media. However, these scattered fields also contain information about the structure and distribution of protein complexes, organelles, cells and whole tissues that can be used to assess the health of tissue or to enhance imaging contrast by excluding confounding signals. The interpretation of scattered fields depends on a detailed understanding of the scattering process as well as sophisticated measurement systems. In this work, the development of new instruments based on low coherence interferometry (LCI) is presented in order to perform precise, depth-resolved measurements of scattered fields. Combined with LCI, the application of new light scattering models based on both analytic and numerical methods is presented in order to interpret scattered field measurements in terms of scatterer geometry and tissue health.

The first portion of this work discusses the application of a new light scattering model to the measurement recorded with an existing technique, Angle Resolved Low Coherence Interferometry (a/LCI). In the a/LCI technique, biological samples are interrogated with collimated light and the energy per scattering angle at each depth in the volume is recorded interferometrically. A light scattering model is then used to invert the scattering measurements and measure the geometry of cell nuclei. A new light scattering model is presented that can recover information about the size, refractive index, and for the first time, shape of cell nuclei. This model is validated and then applied to the study of cell biology in a series of experiments measuring cell swelling, cell deformation, and finally detecting the onset of apoptosis.

The second portion of this work introduces an improved version of a/LCI based on two dimension angle resolved measurement (2D a/LCI) and Fourier domain low coherence interferometry (FD-LCI). Several systems are presenting for high speed and polarization-resolved measurements of scattered fields. An improved light scattering model based on fully polarization and solid angle resolved measurements is presented, and then efficiently implemented using distributed computing techniques. The combined system is validated with phantoms and is shown to be able to uniquely determine the size and shape of scattering particles using a single measurement.

The third portion of this work develops the use of angle-resolved interferometry for imaging through highly scattering media by exploiting the tendency of scatterers to forward scatter light. A new interferometers is developed that can image through very large numbers of scattering events with acceptable resolution. A computational model capable of reproducing experimental measurements is developed and used to understand the performance of the technique.

The final portion of the work develops a method for processing 2D angle resolved measurements using optical autocorrelation. In this method, measurements over a range of angles are fused into a single depth scan that incorporates the component of scattered light only from certain spatial scales. The utility of the technique is demonstrated using a gene knockout model of retinal degeneration in mice. Optical autocorrelation is shown to be a potentially useful biomarker of tissue disease.