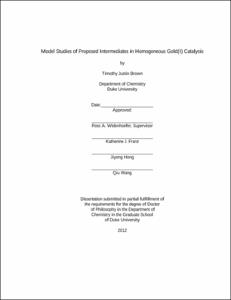 The ability of gold(I) complexes to function as catalysts for myriad organic transformations has led to a dramatic increase in their utilization. Among the homogeneous reactions catalyzed by gold(I), carbon-carbon and carbon-heteroatom bond forming processes are of particular interest for the fields of organic synthesis and pharmaceutical development. Discussed herein are gold(I)-catalyzed methods for the intra- and intermolecular functionalization of alkenes, alkynes, and allenes with nitrogen- and oxygen-based nucleophiles leading to new C&#8210;X bonds (X = N, O).

Approximately 26 cationic gold &pi;-alkene complexes, containing either IPr [IPr = 1,3-bis(2,6-diisopropylphenyl)imidazol-2-ylidene] or P(t-Bu)2o-biphenyl ancillary ligands, were isolated or generated and six complexes were analyzed by X-ray crystallography. Spectroscopy, X-ray crystallography, and alkene binding studies are in accord with a gold&#8722;(&#960;-alkene) interaction dominated by &sigma;-donation from the alkene to gold. Kinetic analyses of degenerate isobutylene exchange in both the IPr and phosphine systems are consistent with associative pathways for isobutylene exchange involving cationic bis(alkene) intermediates.

Reaction of a 1:1 mixture of (L)AuCl [L = P(t-Bu)2o-biphenyl or IPr] and AgSbF6 with internal alkynes led to isolation of the corresponding cationic, two-coordinate gold &pi;-alkyne complexes in &#8805;90% yield. Equilibrium binding studies show that the binding affinities of alkynes to gold(I) are strongly affected by the electron density of the alkyne and to a lesser extent on the steric bulk of the alkyne. Treatment of a suspension of (IPr)AuCl and AgSbF6 with terminal arylacetylenes led to the formation of thermally unstable gold &pi;-alkyne complexes of the form [(IPr)Au(eta<super>2</super>-HC&#8801;CAr)] SbF6 in &#8805;86 ± 5% yield, which were characterized by spectroscopy without isolation. Warming these complexes to 0 °C led to C(sp)-H bond cleavage and formation of dinuclear gold(I) &sigma;,&pi;-acetylide complexes of the form {[(IPr)Au]2(eta<super>1</super>,eta<super>2</super>-C&#8801;CAr)} SbF6, three of which were isolated in 99% yield and one of which was characterized by X-ray crystallography.