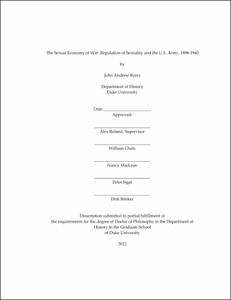 The United States began to look beyond its continental boundaries and acquire a new, far-flung empire in the late nineteenth century. Two decades later, a national draft and mobilization program brought millions of men into the army when the United States intervened in the First World War. The U.S. Army also experienced several major changes in the first four decades of the twentieth century, including massive growth in the size of the army's forces, changes in the demographics of soldiers and a related effort "Americanize" the army, and increased professionalization and internal reform as the army attempted to improve its performance and increase its standing in the nation. Along with these changes came the efforts of influential Progressive social and moral reformers who sought to reform the U.S. Army and inculcate newly enlisted soldiers with middle-class values and behavior. Over time, army leaders and War Department officials found that they needed to address the perennial set of problems that soldiers' sexual relationships created for the army and its new long-term missions in Asia and Europe. While the U.S Army was initially interested in the sex lives of soldiers primarily for utilitarian reasons, it eventually assumed an institutional interest in cultivating particular kinds of masculine identities for soldiers.

This dissertation explores how the U.S. Army of the early twentieth century conceived of a host of issues related to sexuality: marriage and family life, prostitution and venereal disease, rape and sexual violence, same-sex sexuality, and conceptions of masculinity, among others. It examines how the army sought to regulate and shape the sexual behaviors of soldiers and the civilians with whom they came into sexual contact. The sexual cultures, practices, and behaviors of soldiers and their partners, along with the U.S. Army's efforts to regulate their sexuality, constitute what it describes as the "sexual economy of war." This dissertation argues that the U.S. Army first attempted to gain control of almost all aspects of soldiers' sexuality and then tried to carefully manage and regulate that sexual economy to best fulfill the army's missions. The army suppressed soldiers' sexual behaviors and expressions that it perceived as running counter to the good of the service or creating inefficiencies. It encouraged those aspects of sexual identity that the army believed benefited the service - for instance, hypermasculine demeanor and actions - eventually purging soldiers who engaged in same-sex sexual activities because these practices became linked with effeminacy and mental disorders and producing a set of militant masculinities among soldiers.

These issues are explored through five case studies of specific time periods and geographic areas: Fort Riley in Kansas from 1898-1940; the Philippines from 1898-1918; Camp Beauregard in Louisiana, 1917-1919; the American Expeditionary Forces (AEF) in France and the American Forces in Germany (AFG), 1917-1923; and Hawaii, 1909-1940. The army's new position in American society, especially after World War I, and its overseas operations opened up a host of new and different kinds of sexual politics, possibilities, and relationships for all those touched by the U.S. Army's regulation of sexuality.