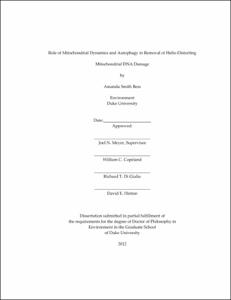 Mitochondria are the primary energy producers of the cell and play key roles in cellular signaling, apoptosis and reactive oxygen species (ROS) production. Mitochondria are the only organelles that contain their own genome which encodes for a small subset of electron transport chain (ETC) proteins as well as the necessary tRNAs and ribosomal subunits to translate these proteins. Over 300 pathogenic mitochondrial DNA (mtDNA) mutations have been shown to cause a number of mitochondrial diseases emphasizing the importance of mtDNA maintenance and integrity to human health. Additionally, mitochondrial dysfunction and mtDNA instability are linked to many wide-spread diseases associated with aging including cancer and neurodegeneration. Mitochondria lack the ability to repair certain helix-distorting lesions that are induced at high levels in mtDNA by important environmental genotoxins including polycyclic aromatic hydrocarbons, ultraviolet C radiation (UVC) and mycotoxins. These lesions are irreparable and persistent in the short term, but their long-term fate is unknown. Degradation of mitochondria and mtDNA is carried out by autophagy. Autophagy is protective against cell stress and apoptosis resulting from exposure to mitochondrial toxicants suggesting that it plays an important role in removal of unstable mitochondria that can serve as a source of ROS or initiate apoptotic cell death. Furthermore, dysfunctional mitochondria can be specifically targeted for degradation by the more specific process of mitophagy influenced in part by the processes of mitochondrial dynamics (i.e., fusion and fission).

Removal of UVC-induced mtDNA damage was detectable by 72 hours in <italic>C. elegans</italic> and mammalian cell culture, and required mitochondrial fusion, fission and autophagy, providing genetic evidence for a novel mtDNA damage removal pathway. UVC exposure induced autophagy with no detectable effect on mitochondrial morphology in both systems; mitochondrial function was inhibited in the <italic>C. elegans</italic> system but not in the cell culture system in which the degree of mtDNA damage induced was less. Furthermore, mutations in genes involved in these processes as well as pharmacological inhibition of autophagy exacerbated mtDNA damage-mediated larval arrest, illustrating the <italic>in vivo</italic> relevance of removal of persistent mtDNA damage. Mutations in genes in these pathways exist in the human population, demonstrating the potential for important gene-environment interactions affecting mitochondrial health after genotoxin exposure.