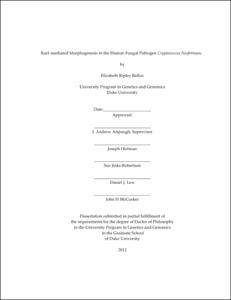 <italic>Cryptococcus neoformans</italic> pathogenesis results from the proliferation of yeast-phase fungal cells within the human host. The Ras1 signal transduction cascade is a major regulator of <italic>C. neoformans</italic> yeast and hyphal-phase morphogenesis, thermotolerance, and pathogenesis. Previous work identified the conserved Rho-GTPases Cdc42 and Rac1 as potential downstream targets of Ras1. In this work, we identify the duplicate Cdc42 and Rac paralogs, Cdc42 and Cdc420, and Rac1 and Rac2, as major effectors of Ras1-mediated thermotolerance and polarized growth, respectively. Using genetic and molecular biology techniques, including mutant analyses and over-expression studies, we determine the separate and overlapping roles of the four Rho-GTPases in Ras1-mediated morphogenesis. The Cdc42 paralogs are non-essential but are required for thermotolerance and pathogenesis. Ras1 acts through the Cdc42 paralogs to regulate cytokinesis via the organization of septin proteins. The major paralog, Cdc42, and the minor paralog, Cdc420, exhibit functional differences that are primarily dictated by transcriptional regulation. Additionally, CDC42 transcription is induced by exposure to temperature stress conditions. In contrast, Ras1 acts through the equivalently transcribed RAC paralogs to regulate polarized growth during both yeast and hyphal-phase morphogenesis. Rac1 and Rac2 are individually dispensable and appear to be functionally redundant but are synthetically required for yeast phase growth and spore development. The sub-cellular localization of the Rac paralogs is dependent on both Ras1 and post-translational modification by prenyl transferases. The identification and characterization of the conserved elements of the Ras1 signal transduction cascade presented here constitute an important contribution towards the design of anti-fungal agents that are based on existing Ras-pathway inhibitors.