A Theoretical and Experimental Study of DNA Self-assembly 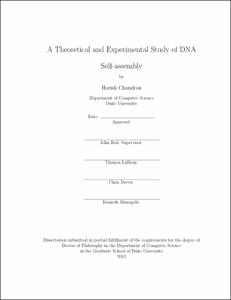 The control of matter and phenomena at the nanoscale is fast becoming one of the most important challenges of the 21st century with wide-ranging applications from energy and health care to computing and material science. Conventional top-down approaches to nanotechnology, having served us well for long, are reaching their inherent limitations. Meanwhile, bottom-up methods such as self-assembly are emerging as viable alternatives for nanoscale fabrication and manipulation.

A particularly successful bottom up technique is DNA self-assembly where a set of carefully designed DNA strands form a nanoscale object as a consequence of specific, local interactions among the different components, without external direction. The final product of the self-assembly process might be a static nanostructure or a dynamic nanodevice that performs a specific function. Over the past two decades, DNA self-assembly has produced stunning nanoscale objects such as 2D and 3D lattices, polyhedra and addressable arbitrary shaped substrates, and a myriad of nanoscale devices such as molecular tweezers, computational circuits, biosensors and molecular assembly lines. In this dissertation we study multiple problems in the theory, simulations and experiments of DNA self-assembly.

We extend the Turing-universal mathematical framework of self-assembly known as the Tile Assembly Model by incorporating randomization during the assembly process. This allows us to reduce the tile complexity of linear assemblies. We develop multiple techniques to build linear assemblies of expected length N using far fewer tile types than previously possible.

We abstract the fundamental properties of DNA and develop a biochemical system, which we call meta-DNA, based entirely on strands of DNA as the only component molecule. We further develop various enzyme-free protocols to manipulate meta-DNA systems and provide strand level details along with abstract notations for these mechanisms.

We develop a DNA detection system employing the triggered self-assembly of a novel DNA dendritic nanostructure. Detection begins when a specific, single-stranded target DNA strand triggers a hybridization chain reaction between two distinct DNA hairpins. Each hairpin opens and hybridizes up to two copies of the other, and hence each layer of the growing dendritic nanostructure can in principle accommodate an exponentially increasing number of cognate molecules, generating a nanostructure with high molecular weight.

We build linear activatable assemblies employing a novel protection/deprotection strategy to strictly enforce the direction of tiling assembly growth to ensure the robustness of the assembly process. Our system consists of two tiles that can form a linear co-polymer. These tiles, which are initially protected such that they do not react with each other, can be activated to form linear co-polymers via the use of a strand displacing enzyme.