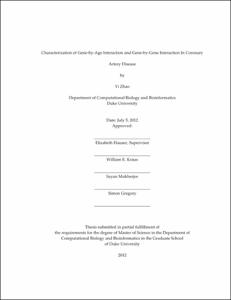 The success of genome-wide association studies (GWAS) has been limited by missing heritability and lack of biological relevance of identified variants. We sought to address these issues by characterizing interaction among genotypes and environment using case-control samples enrolled at Duke University Medical Center. First, we studied the impact of age on coronary artery disease (CAD). Gene-by-age (GxAGE) interactions were tested at genome-wide scale, along with genes' marginal effects in age-stratified groups. Based on the interaction model, age plays the role as a modifier of the age-CAD relationship. SNPs associated with CAD in both young and old demonstrate consistency in effect sizes and directions. In spite of these SNPs, vastly different CAD associated genes were discovered across age and race groups, suggesting age-dependent mechanisms of CAD onset. Second, we explored gene-by-gene interaction (GxG) using a statistical model and compared results to biological evidence. Specifically, we investigated GATA2 as a candidate gene transcription factor, and modeled the interaction with genome-wide SNPs. The genetic effects at interacting loci were modified by GATA2 genotype. Without taking GATA2 variants into account , no marginal main effects were detected. Open access ChIP-seq data was available for comparison with the statistical model, and to relate GWAS findings with biological mechanisms. The agreement between the statistical and biological models was very limited.