The Evolution of the Deacetylase Sir2 in Yeast 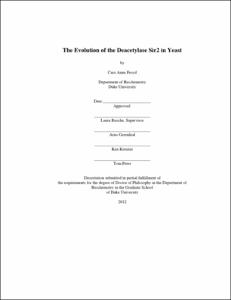 Gene duplication is an important evolutionary tool for fostering diversification and expanding gene families. However, while this concept is well understood and accepted in a theoretical capacity, the particular changes that lead to the functional diversification of gene duplicates are less well understood and documented. Additionally, little work has been done to understand how functions are gained or lost, which leads to the diversification of orthologous genes. The Sir2 family of NAD+-dependent deacetylases is an excellent gene family to study questions of duplication and diversification as it is ubiquitous throughout all kingdoms of life, and it has expanded through a number of gene duplications so that while most bacteria have a single sirtuin/species, mammals have seven sirtuins/species. Sirtuins also have a wide array of biological functions and targets, but some of these functions are conserved in eukaryotes.

In this study, Sir2 is used to investigate the principles behind gene duplication and functional diversification in a molecular context. Sir2 function is studied in multiple species of budding yeast, the model organism Saccharomyces cerevisiae, Kluyveromyces lactis, and Candida lusitaniae using a combination of genetic, biochemical, and high-throughput methods. Sir2 and its paralog Hst1 from S. cerevisiae were used with their non-duplicated ortholog Sir2 from K. lactis to examine the type of molecular changes that occur after gene duplication and lead to subfunctionalization. Then Sir2 from the more divergent C. lusitaniae was used to study how functions are gained or lost.

To understand better how Sir2 has gained or lost functions, we studied the Sir2 function in C. lusitaniae to serve as an intermediate between the fission yeast Schizosaccharomyces pombe Sir2, whose functions have been identified, and K. lactis and S. cerevisiae. Interestingly, ClSir2 was localized to the rDNA, which is also the case in S. pombe, K. lactis, and S. cerevisiae, but not at the telomeres, which is another locus at which Sir2 is found in other yeast. Additionally, ClSir2 was not found to have an impact on gene expression unlike Sir2 and Hst1 in other yeast where they repress transcription.