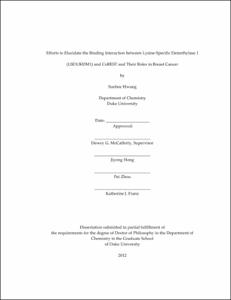 Histone modifications play important roles in regulating gene expression in various cellular processes by altering the underlying chromatin structure and thus influencing related pathological conditions. Histone methylation is one such modification that was thought to be static and enzymatically irreversible until the recent discovery of histone demethylases. Lysine specific demethylase 1 (LSD1) is a unique histone demethylase that removes methyl groups on lysine residues and mediates expression of many genes important in cancer progression. LSD1 activity and its substrate specificity are mainly regulated by association with a number of co-regulatory proteins. CoREST is one such important binding protein that endows LSD1 with the ability to associate with and demethylate nucleosomal substrates.

Given the significance of CoREST in directing LSD1 activity, herein we report our efforts to regulate LSD1 enzymatic activity by modulating its binding interaction with CoREST in order to provide a new means to inhibit the demethylation activity of LSD1 and thereby suggest a novel therapeutic intervention for breast cancer where LSD1 is implicated. Towards this end, initial steps have been taken to elucidate the molecular basis of the binding interaction between LSD1 and the functional region of CoREST, denoted as CoREST286-482 , by conducting isothermal titration calorimetry (ITC) studies. We found that the proteins tightly interact in a 1:1 stoichiometric ratio with a dissociation binding constant (Kd) of 15.9 ± 2.07 nM, and that their binding interaction is characterized by a favorable enthalpic contribution near room temperature with a smaller entropic penalty at pH 7.4. Furthermore, we defined that the linker region of CoREST286-482 is a key determinant for the tight binding interaction toward LSD1. Accordingly, the peptide corresponding to the linker region of CoREST286-482 (designated as the Linker peptide) was used as a potent competitive modulator of the binding interaction between LSD1 and CoREST286-482 with our expectation that the Linker peptide will compete with CoREST286-482 for binding to LSD1 and thus sequester LSD1 from nucleosomal contexts to inhibit its demethylation activity.

Indeed, the Linker peptide has shown successful inhibitory activity against the binding of LSD1 to CoREST286-482 at nanomolar concentration. We evaluated the potential of the Linker peptide to inhibit LSD1 demethylation activity in cellular models of estrogen receptor a (ERa)-positive breast cancer cell line (MCF7) where LSD1 is known to co-localize with ERa and affect ERa-transcription activities. We were able to observe that the disruption of the binding interaction between LSD1 and CoREST by the Linker peptide affects not only the demethylation activity of LSD1 on both H3K4 and H3K9 but also the ERa-recruitment to promoters of target genes and processes required for proliferation of breast cancer cells. Thus it is believed that LSD1 demethylation activity through its physical and functional interaction with CoREST is essential in the development of ERa-positive breast cancer. Furthermore, we have observed that not LSD1 but CoREST physically interacts with ERa, which suggests a potential role of CoREST as a bridge connecting LSD1 to ERa. At the moment although the precise mechanisms underlying the implication of LSD1 through CoREST interaction in ERa-positive breast cancer still remain elusive, our study has verified that modulating LSD1 enzymatic activity by interrupting a critical protein-protein interaction offers a distinctively new avenue of inhibition of LSD1 activity, which has anti-cancer potential.