Regulation of Asymmetric Cell Divisions in the Developing Epidermis 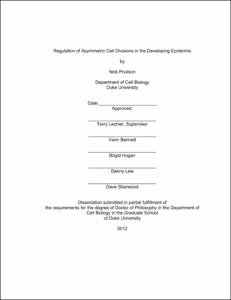 During development, oriented cell divisions are crucial for correctly organizing and shaping a tissue. Mitotic spindle orientation can be coupled with cell fate decisions to provide cellular diversity through asymmetric cell divisions (ACDs), in which the division of a progenitor cell results in two daughters with different cell fates. Proper tissue morphogenesis relies on the coupling of these two phenomena being highly regulated. The development of the mouse epidermis provides a powerful system in which to study the many levels that regulate ACDs. Within the basal layer of the epidermis, both symmetric and asymmetric cell divisions occur. While symmetric divisions allow for an increase in surface area and progenitor cell number, asymmetric divisions drive the stratification of the epidermis, directly contributing additional cell layers (Lechler and Fuchs 2005; Poulson and Lechler 2010; Williams, Beronja et al. 2011).

Utilizing genetic lineage tracing to label individual basal cells I show that individual basal cells can undergo both symmetric and asymmetric divisions. Therefore, the balance of symmetric:asymmetric divisions is provided by the sum of individual cells' choices. In addition, I define two control points for determining a cell's mode of division. First is the expression of the mInscuteable gene, which is sufficient to drive ACDs. However, there is robust control of division orientation as excessive ACDs are prevented by a change in the localization of NuMA, an effector of spindle orientation. Finally, I show that p63, a transcriptional regulator of stratification, does not control either of these processes, rather it controls ACD indirectly by promoting cell polarity.

Finally, to determine if post-translational modifications of NuMA could regulate its localization I tested the importance of a conserved Cdk-1 phosphorylation site. Interestingly, a non-phosphorylatable form of NuMA localized predominately to the cortex while the phosphomimetic protein localized strongly to spindle poles. In agreement with these data, use of a CDK-1 inhibitor was able to enhance the cortical localization of NuMA. Unexpectedly, the non-phosphorylatable form of NuMA did not require LGN to localize to the cortex. Additionally, restoration of cortical localization of the phosphomimetic form of NuMA was accomplished by the overexpression of either LGN or 4.1. Thus, phosphorylation of NuMA may alter its overall affinity for the cortex.

Overall, my studies highlight two important regulatory mechanisms controlling asymmetric cell division in the epidermis. Additionally, I show a novel role for the interaction between NuMA and 4.1 in providing stability at the cortex. This will ultimately provide a framework for analysis of how external cues control the important choice between asymmetric and symmetric cell divisions.