Virtue's an Ass: When Being Bad is Really Good 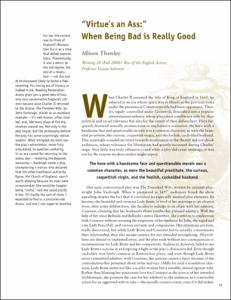 View / Download
502.3 Kb
Date
Author
Thawley, Allison
Repository Usage Stats
410
views
3,864
downloads
Abstract
When Charles II assumed the title of King of England in 1660, he ushered in an era whose spirit was as liberal as the previous years under the puritanical Commonwealth had been oppressive. Theater,rigidly controlled under Cromwell, flourished into a popular entertainment industry whose plays were notable not only for their political and social relevance but also for the extent of their debauchery.
Description
Paper submitted for Writing 20 (Fall 2006) and published in Deliberations, 2007-2008
Type
Course paper
Subject
Restoration Era
Theater
Permalink
https://hdl.handle.net/10161/583
Citation
Thawley, Allison (2006). Virtue's an Ass: When Being Bad is Really Good. Course paper, Duke University. Retrieved from https://hdl.handle.net/10161/583.
Collections
More Info
Show full item record