Towards the Elucidation of Association in Aqueous Solution: Thermodynamic and Structural Studies of Protein - Ligand Interactions 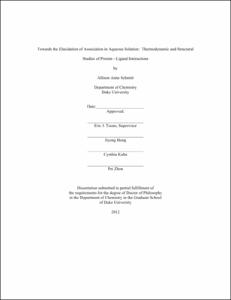 Nearly every aspect of biology is controlled by non-covalent association events, but the diversity of these events is astounding. Association constants can vary over at least a dozen orders of magnitude, and timescales for these interactions range from microseconds to years. Molecular recognition events control the affinity and specificity of virtually all of these biological interactions. Remarkably, the relationships between structure and thermodynamics, and thus the basis of selectivity and affinity in these events remains poorly understood. An overarching goal of the Toone laboratory is to better understand the molecular facets of non-covalent association events in aqueous solution. In this dissertation, three model systems are explored to elucidate aspects of non-covalent binding events.

Camelid-derived single domain antibodies demonstrate significant stability and unique binding properties versus conventional antibodies, and the work described herein helps rationalize the observation that these antibody domains function effectively as antigen binding agents. Early attempts to develop a model system with either lysozyme or biotin as the antigen of interest were not successful, but a model system using methotrexate as the antigen was successfully developed. High affinity binding interactions were observed at neutral pH, and interestingly these antibodies demonstrated some binding affinity for methotrexate even at more extreme pH levels. The observed changes in heat capacity and the effect of salt concentration were in accord with established literature precedents. In addition, no evidence of pH-induced destabilization of secondary single domain antibody structure was observed, even when accompanied by variation in temperature.

The Toone laboratory is also working to elucidate the nature and origins of additivity in multivalent protein - ligand binding events in a number of intermolecular and intramolecular systems. The cluster glycoside effect (enhancements in binding affinity beyond what would be expected with increases in valency) has been demonstrated in a large number of protein - carbohydrate binding systems, but the molecular basis for the apparent enhancements in affinity remains unclear. The monomeric carbohydrate - binding protein Galectin-3 (G3) was studied as a model system for conditional multivalency to explore the origins of this effect. We completed a thorough investigation of the thermodynamics of binding between multivalent dendrimeric ligands and both the full-length and truncated proteins (carbohydrate recognition domain, CRD). Enhanced affinities were observed for multivalent interactions with full-length G3 but not for interactions with the CRD. In addition, aggregation and precipitation was observed only in multivalent binding events with full-length G3. Although multivalent binding can occur through an intramolecular (chelate-type) binding mode, these results are consistent with the notion that the cluster glycoside effect is driven through intermolecular bindng motifs, characterized by aggregation and precipitation.

Traditionally, intramolecular (chelate-type) binding pathways are thought to be driven entropically; however, work from the Toone laboratory has demonstrated that multivalent association in several intramolecular multivalent binding systems is enthalpically favored and entropically opposed. General conclusions regarding the origins of intramolecular additivity in ligand binding are lacking, and the Src SH2 domain was developed as a model system for exploring these concepts. The Src SH2 domain was successfully expressed and purified, and a peptidic series of ligands was synthesized and advanced to crystallographic trials. Extensive apo-crystallization attempts were unsuccessful in producing an atomic-resolution structure, and despite optimization trials, co-crystallization of the peptidic ligands with the Src SH2 domain also did not achieve the necessary resolution to provide structural data.