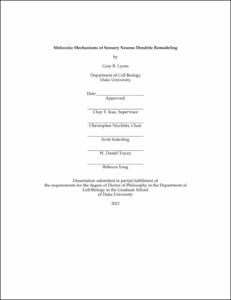 Dendrites are the primary sites of information input into neurons. Proper establishment and maintenance of dendritic structure is essential for the function of neural circuits. In response to certain stimuli, the shape of dendritic arbors may be refined and remodeled. Despite the importance of dendrite structural plasticity in health and disease, the molecular mechanisms governing this process are not well understood. One genetically tractable platform to study context-dependent remodeling is the Drosophila peripheral nervous system. A subset of sensory neurons, the class IV dendritic arborizing neurons, has been shown to prune and regrow dendrites during metamorphosis. My research has focused on the mechanism through which these neurons regenerate a morphologically distinct dendritic structure. A forward genetic protein trap screen was conducted to identify genes differentially expressed during metamorphosis compared to larval stages. I identified Cysteine proteinase-1 as a gene upregulated in class IV neurons during dendrite regeneration under control of ecdysone hormone. Neurons carrying mutations of Cysteine proteinase-1 were unable to target and elaborate secondary dendritic arbors, resulting in disrupted morphology. These data were found to phenocopy dendrite regeneration defects in neurons lacking the homeobox transcription factor cut. Furthermore, I present evidence that Cysteine proteinase-1 can regulate a truncated cut isoform with altered function. This research presents a novel insight into the molecular mechanisms of sensory neuron dendrite remodeling. New directions arising from this study include potential conservation of this mechanism across species, downstream effectors of identified genes, and characterization of other systems subject to context-dependent dendrite regeneration. Elucidating the processes regulating dendrite remodeling will provide useful insight into nervous system function in health and disease.