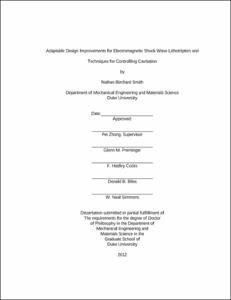 In this dissertation work, the aim was to garner better mechanistic understanding of how shock wave lithotripsy (SWL) breaks stones in order to guide design improvements to a modern electromagnetic (EM) shock wave lithotripter. To accomplish this goal, experimental studies were carefully designed to isolate mechanisms of fragmentation, and models for wave propagation, fragmentation, and stone motion were developed. In the initial study, a representative EM lithotripter was characterized and tested for in vitro stone comminution efficiency at a variety of field positions and doses using phantom kidney stones of variable hardness, and in different fluid mediums to isolate the contribution of cavitation. Through parametric analysis of the acoustic field measurements alongside comminution results, a logarithmic correlation was determined between average peak pressure incident on the stone surface and comminution efficiency. It was also noted that for a given stone type, the correlations converged to an average peak pressure threshold for fragmentation, independent of fluid medium in use. The correlation of average peak pressure to efficacy supports the rationale for the acoustic lens modifications, which were pursued to simultaneously enhance beam width and optimize the pulse profile of the lithotripter shock wave (LSW) via in situ pulse superposition for improved stone fragmentation by stress waves and cavitation, respectively. In parallel, a numerical model for wave propagation was used to investigate the variations of critical parameters with changes in lens geometry. A consensus was reached on a new lens design based on high-speed imaging and stone comminution experiments against the original lens at a fixed acoustic energy setting. The results have demonstrated that the new lens has improved efficacy away from the focus, where stones may move due to respiration, fragmentation, acoustic radiation forces, or voluntary patient movements. Using traditional theory of brittle fragmentation and newfound understanding of average peak pressure correlation to stone comminution, the entire set of stone comminution data for lens comparison was modeled using a Weibull-style distribution function. This model linked both the average peak pressure and shock wave dose to efficacy, including their respective threshold parameters, and demonstrated correlation of coefficients to cavitation activity. Subsequently, this model was used in prediction of stone comminution efficiency from mimicked respiratory motions in vitro, which compared favorably to actual simulated motion studies using both the new and original lenses. Under a variety of mimicked respiratory motions, the new lens produced statistically higher stone comminution efficiency than the original lens. These results were confirmed in vivo in a swine model, where the new lens produced statistically higher stone comminution after 1,000 and 2,000 shocks. Finally, a mechanistic investigation into the effects of cavitation with the original lens was conducted using an integrated, self-focusing annular ring transducer specially designed for tandem pulse lithotripsy. It was found that cavitation and stone comminution efficiency are progressively enhanced by tandem pulsing as source energies of both the primary LSW and trailing pressure pulse increase, which suggests cavitation and stress waves act synergistically enhance the efficacy in kidney stone fragmentation.