Military Institutions and State Formation in the Hellenistic Kingdoms 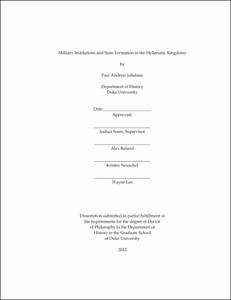 This dissertation examines the history of the military institutions of the Hellenistic kingdoms. The kingdoms emerged after years of war-fighting, and the capacity to wage war remained central to state formation in the Hellenistic Age (323-31 B.C.). The creation of institutions and recruitment of populations sufficient to field large armies took a great deal more time and continual effort than has generally been imagined. By bringing documentary evidence into contact with the meta-narratives of the Hellenistic period, and by addressing each of the major powers of the Hellenistic world, this project demonstrates the contingencies and complexities within the kingdoms and their armies. In so doing, it offers both a fresh perspective on the peoples and polities that inhabited the Hellenistic world after Alexander and a much-revised narrative of the process by which Alexander's successors built kingdoms and waged war. Inheritors of extensive political and military traditions, they were forced to reshape them in their new and volatile context, eventually establishing large and powerful kingdoms and armies that dominated the eastern Mediterranean and Near East for over one hundred years.

The early model of Hellenistic kingship was based on military successes and martial valor. It found a complement in the burgeoning mercenary market of the early Hellenistic period, which allowed Alexander's generals to field massive armies without relying on complex military institutions for recruitment and mobilization. As years of continual warfare stressed populations and war chests, several new kings, crowned in the era of war, sought to end their reliance on mercenaries by developing core territories, settling soldiers, and constructing powerful military institutions. These institutions did not develop seamlessly or quickly, and often functioned awkwardly in many of the locales that had recently come under Macedonian rule, whether in the cities of Syria or along the Nile valley in Egypt. My project involves several detailed studies of military mobilization during the Hellenistic period, as a way to analyze the structures and evaluate the successes of the kingdoms' respective military institutions.

I employ methodologies from both history and classical studies, moving between technical work with papyrological, epigraphic, and archaeological evidence, close reading of ancient texts, and comparative analysis of narrative and documentary texts, while drawing upon the large historiographies of each of the largest kingdoms. One of this dissertation's contributions is in making comparisons between these spaces and across time, when much of Hellenistic history has trended toward ever-greater partition. The papyrological material, in particular, permits the greatest access into both the social activities of individuals and the particular elements of human, legal, and customary infrastructure within a Hellenistic state, though it has rarely been used outside of particularly Ptolemaic histories. My dissertation argues against Egyptian exceptionalism, and offers a Hellenistic history drawn from the full array of available sources. Part of the narrative of Egyptian exceptionalism developed from the perception that it was in some sense less traditionally Macedonian than the other two kingdoms. A careful reading of the evidence indicates instead that in the violent and multi-polar world of the Hellenistic age, military identity was very flexible, and had been since the time of Alexander. Additionally, the strict adherence of the other kingdoms to the Macedonian way of war ended in defeat at the hands of the Romans, while the Ptolemies in Egypt innovated counterinsurgent activities that preserved their power in the wealthiest region of the Mediterranean.