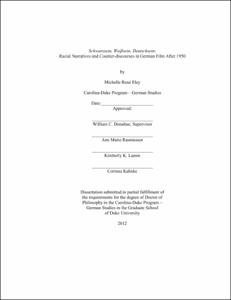 This dissertation uses film to explore shifts in conceptions of race, cultural identity, and national belonging in Germany from the 1950s West Germany to contemporary reunified Germany. Through the analysis of several German productions featuring black characters in major narrative or symbolic roles, it identifies narrative and cinematic techniques used to thematize and problematize popular German conceptions of race and racism and to utilize race as a flexible symbolic resource in defining specific identity borders. The dominant discourse around the concept of race and its far-reaching implications has long been impeded by the lack of a critical German vocabulary. This gap in mainstream German language is in large part a consequence of the immutable association between &ldquo;race&rdquo; (in German, <italic>Rasse</italic>) as a term, and the pro-Aryan, anti-Semitic dogma of National Socialist ideology. As Germany struggles to address racism as a specific problem in the process of its ongoing project to rehabilitate national identity in a post-colonial era indelibly marked by the Second World War, the films discussed in this work &mdash; <italic>Toxi</italic> (R.A. Stemmle, 1952), <italic>Gottes zweite Garnitur</italic> (P. Verhoeven, 1967), <italic>Angst essen Seele auf</italic> (R.W. Fassbinder, 1974), <italic>Die Ehe der Maria Braun</italic> (R.W. Fassbinder, 1979), <italic>Alles wird gut</italic> (Maccarone, 1998) and <italic>Tal der Ahnungslosen</italic> (Okpako, 2003) &mdash; provide evidence of attempts to create counter-discourses within the space of this language gap.

Using approaches based primarily in critical race and film studies, the following work argues that these films' depictions of racism and racial conflict are often both confined by and add significant new dimension to definitions of Blackness and of conceptions of race and racism in the German context. These attempts at redefinition reveal the ongoing difficulties Germany has faced when confronting the social and ideological structures that are the legacy of its colonialist and National Socialist history. More importantly, however, the films help us to retrace and recover Germany's history of resistance to that legacy and expand the imaginative possibilities for creating coalitions capable of affecting social change.