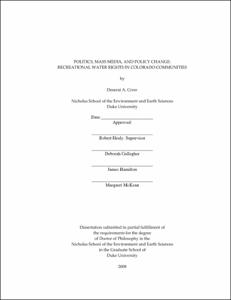 View / Download
38.5 Mb
Date
Author
Crow, Deserai Anderson
Advisor
Healy, Robert G
Repository Usage Stats
508
views
395
downloads
Abstract
This study looks at the process of local policy change in environmental policy decisions. It employs a comparative case study research design to analyze the creation of a new recreational water right in Colorado to support whitewater boating. It compared the 12 communities that have applied for the new water right to 6 non-adopter communities. Factors including stakeholder groups, citizens, policy entrepreneurs, mass media, policy knowledge, policy timing, and politicians' motivations are analyzed to determine their role in local policy decisions. This research also considers how policy change in local communities promoted new state laws, and was in turn influenced by them. The dataset includes interviews with 75 Colorado water experts and community decision makers, mass media coverage of the policy process, and legal and legislative documentation of the process. These data were then analyzed within cases and across cases to create a model of community policy change. This research found that three elements were present when a community's policies changed regarding the use of natural resources. First, the community was dependent on the resource, either economically or socially. Second, a policy entrepreneur was present to influence the community's decision makers to enact a new policy regarding natural resource use. These policy entrepreneurs were most often experts in water law or management. Finally, the community had access to accurate information regarding the new policy. The case study analysis found that neither mass media coverage of the issue nor citizen participation influenced policy change. This may have occurred primarily because water rights were viewed as a technical detail to be handled by experts. Citizens usually became engaged in the process only after the decision to file for the water right had been made. Similarly, media coverage of recreational water rights was present in most cases only after the policy decision had been made. This study provides an understanding of the processes that communities go through in deciding to change policies to account for new non-consumptive uses and the factors that influence those decisions. This research is not only relevant to water law in Colorado, but also to environmental policy in general.
Type
Dissertation
Department
Environment
Subject
Political Science, General
Journalism
Environmental policy
mass media
policy change
case study method
western water law
recreation and environment
Permalink
https://hdl.handle.net/10161/586
Citation
Crow, Deserai Anderson (2008). Politics, Mass Media, and Policy Change: Recreational Water Rights in Colorado Communities. Dissertation, Duke University. Retrieved from https://hdl.handle.net/10161/586.
Collections
More Info
Show full item record