Insights Into the Virulence Determinants of the Emerging Pathogen Kingella kingae 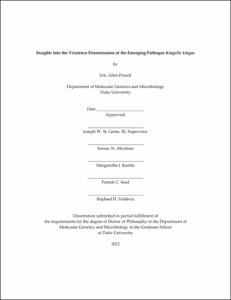 Having established that <italic>K. kingae</italic> produces a capsule, a large-scale polysaccharide purification technique was developed for capsule analysis of strain 269-492. Biochemical assays determined that the purified material contained thiobarbituric and phenol-sulfuric acid reactive glycosyl residues. In collaboration with the University of Georgia Complex Carbohydrate Research Center (CCRC), mass spectrometry identified galactose, N-acetyl-galactosamine, and Kdo as the major glycosyl components of the polysaccharide preparation. NMR spectroscopy revealed that the purified material contained two distinct polysaccharides with the structures of &rarr;5)&ndash;&beta;&ndash;Gal<italic>f</italic>&ndash;(1&rarr; and &rarr;3)&ndash;&beta;&ndash;GalNAc<italic>p</italic>&ndash;(1&rarr;5)&ndash;&beta;&ndash;Kdo<italic>p</italic>&ndash;(2&rarr;. Further characterization of the polysaccharides expressed by <italic>K. kingae</italic> may have implications for disease prevention strategies.

Previous work in our lab found that two PilC-like proteins called PilC1 and PilC2 influence type IV pili expression and pilus-mediated adherence. Production of either PilC1 or PilC2 is necessary for <italic>K. kingae</italic> piliation and bacterial adherence. We set out to further investigate the role of PilC1 and PilC2 in type IV pilus-associated phenotypes. We found that PilC1 contains a functional nine amino acid calcium-binding (Ca-binding) site with homology to the <italic>Pseudomonas aeruginosa</italic> PilY1 Ca-binding site and that PilC2 contains a functional 12 amino acid Ca-binding site with homology to the human calmodulin Ca-binding site. Using targeted mutagenesis to disrupt the Ca-binding sites, we demonstrated that the PilC1 and PilC2 Ca-binding sites are dispensable for piliation. Interestingly, we show that the PilC1 site is necessary for twitching motility and adherence to Chang epithelial cells, while the PilC2 site has only a minor influence on twitching motility and no influence on adherence. These findings establish key differences in PilC1 and PilC2 function in <italic>K. kingae</italic> and provide insights into the biology of the PilC-like family of proteins.

Lastly, we set out to define the role of the PilA2 minor pilin in <italic>K. kingae</italic> strain 269-492. While previous studies indicated that PilA2 is not essential for pilus expression or adherence to epithelial cells, analysis of the pilin locus in a diverse set of clinical isolates revealed that the <italic>pilA2</italic> gene sequence is highly conserved, suggesting it serves an important function. Using targeted mutagenesis we showed that PilA2 is not essential for twitching motility and may or may not be involved in natural competence. Western blot analysis was unable to detect PilA2 in wild type pilus preparations, indicating that it is expressed at a level beneath the assay detection limit or does not localize to the pilus. Additionally, site-directed mutagenesis was used to place <italic>pilA2</italic> under control of the highly active <italic>pilA1</italic> promoter and showed that PilA2 is able to be assembled into fibers that mediate intermediate adherence to epithelial cells.