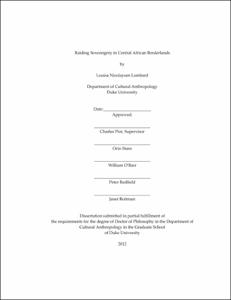 This dissertation focuses on raiding and sovereignty in the Central African Republic's (CAR) northeastern borderlands, on the margins of Darfur. A vast literature on social evolution has assumed the inevitability of centralization. But these borderlands show that centralization does not always occur. Never claimed by any centralizing forces, the area has instead long been used as a reservoir of resources by neighboring areas' militarized entrepreneurs, who seek this forest-savanna's goods. The raiders seize resources but also govern. The dynamics of this zone, much of it a place anthropologists used to refer to as "stateless," suggest a re-thinking of the modalities of sovereignty. The dissertation proposes conceptualizing sovereignty not as a totalizing, territorialized political order but rather through its constituent governing capabilities, which may centralize or not, and can combine to create hybrid political systems. The dissertation develops this framework through analysis of three categories of men-in-arms -- road-blockers, anti-poaching militiamen, and members of rebel groups -- and their relationships with international peacebuilding initiatives. It compares roadblocks and "road cutting" (robbery) to show how they stop traffic and create flexible, personalized entitlements to profit for those who operate them. The dissertation also probes the politics of militarized conservation: in a low-level war that has lasted for twenty-five years, the European Union-funded militiamen fight deadly battles against herders and hunters. Though ostensibly fought to protect CAR's "national patrimony" (its animals and plants), this war bolsters the sovereign capabilities of a range of non-state actors and has resulted in hundreds of deaths in the last few years, many of them hidden in the bush. The dissertation then shows how CAR's recent cycle of rebellion has changed governance in rural areas. Though mobile armed groups have long operated in CAR, they used to work as road cutters and local defense forces and only recently started calling themselves "rebels" -- a move that has landed them in new roles as "governors" of populations while leaving them without the welfare largess they seek. Throughout these various raiders' projects, the idea of the all-powerful state serves as a reference point they use to qualify themselves with sovereign authorities. But their actions as rulers undermine the creation of the unitary political authority they desire and invoke. Failure to appreciate these non-centralized micropolitical processes is a main reason peacebuilding efforts (such as disarmament, demobilization, and reintegration) in the region have failed.