Investigation of the initiation and progression of exocrinopathy in Id3-/- mice 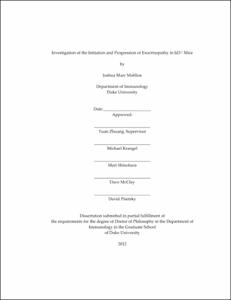 E-proteins are widely expressed and have a multitude of functions in the immune system including proper lymphocyte development and function. E-proteins can be regulated by class V HLH factors, including the inhibitor of differentiation (Id). genes 1-4. Id proteins are expressed throughout the hematopoietic system and have crucial roles in cell fate decisions, differentiation and proliferation in a multitude of tissues and cell types.

Id3 plays a variety of important roles in the immune system including T cell homeostasis, activation, and effector function. The importance of Id3 has been demonstrated using a number of mouse models, and mice that lack Id3 develop an autoimmune condition similar to that of Primary Sjögren's syndrome (PSS). The goal of this dissertation is to further characterize disease initiation and progression in Id3-/- mice, with a focus on the specific targeting of exocrine glands and associated lymphoid tissues by the immune system.

Analysis of serum cytokine levels show that Id3-/- mice develop elevated levels of IL-13 at an early age, and this cytokine is associated with impaired saliva function. Significant populations of IL-13+ T cells have been identified in the peri-glandular lymph nodes of Id3-/- mice, though it appears that there are significant IL-13 producing cells not of the T cell lineage. Reduction of serum IL-13 levels via anti-IL-13 antibody treatment resulted in improved saliva production in response to cholinergic stimulation and reduced the number of mast cells detected in the mandibular and lachrymal glands. The importance of IL-13 in the initiation and progression of exocrinopathy in Id3-/- is being further investigated using a recently acquired IL-13 reporter mouse model. Additionally, IL-13R&#945;1+ cells have been identified in and around the gland tissues of Id3-/- mice, and while the origin and function of these cells remains unknown, these cells have a potential to serve as a biomarker for disease progression and severity.

Lastly, analysis of Id3-/- mice reveals an increased presence of mast cells in the peri-glandular lymph nodes and gland tissues as compared to wild type controls. These mast cells are localized in areas of significant tissue remodeling, serve as a potential source of IL-13 and are associated with impaired saliva production. These findings suggest an important role of mast cells in disease development in Id3-/- mice. Together, these studies have revealed a number of findings that will likely contribute to our understanding of the initiation and progression of exocrinopathy in Id3-/- mice.