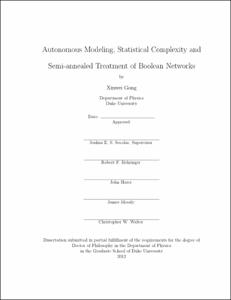 This dissertation presents three studies on Boolean networks. Boolean networks are a class of mathematical systems consisting of interacting elements with binary state variables. Each element is a node with a Boolean logic gate, and the presence of interactions between any two nodes is represented by directed links. Boolean networks that implement the logic structures of real systems are studied as coarse-grained models of the real systems. Large random Boolean networks are studied with mean field approximations and used to provide a baseline of possible behaviors of large real systems. This dissertation presents one study of the former type, concerning the stable oscillation of a yeast cell-cycle oscillator, and two studies of the latter type, respectively concerning the statistical complexity of large random Boolean networks and an extension of traditional mean field techniques that accounts for the presence of short loops.

In the cell-cycle oscillator study, a novel autonomous update scheme is introduced to study the stability of oscillations in small networks. A motif that corrects pulse-growing perturbations and a motif that grows pulses are identified. A combination of the two motifs is capable of sustaining stable oscillations. Examining a Boolean model of the yeast cell-cycle oscillator using an autonomous update scheme yields evidence that it is endowed with such a combination.

Random Boolean networks are classified as ordered, critical or disordered based on their response to small perturbations. In the second study, random Boolean networks are taken as prototypical cases for the evaluation of two measures of complexity based on a criterion for optimal statistical prediction. One measure, defined for homogeneous systems, does not distinguish between the static spatial inhomogeneity in the ordered phase and the dynamical inhomogeneity in the disordered phase. A modification in which complexities of individual nodes are calculated yields vanishing complexity values for networks in the ordered and critical phases and for highly disordered networks, peaking somewhere in the disordered phase. Individual nodes with high complexity have, on average, a larger influence on the system dynamics.

Lastly, a semi-annealed approximation that preserves the correlation between states at neighboring nodes is introduced to study a social game-inspired network model in which all links are bidirectional and all nodes have a self-input. The technique developed here is shown to yield accurate predictions of distribution of players' states, and accounts for some nontrivial collective behavior of game theoretic interest.