Prevalence and predictors of HIV-related stigma among institutional- and community-based caregivers of orphans and vulnerable children living in five less-wealthy countries. 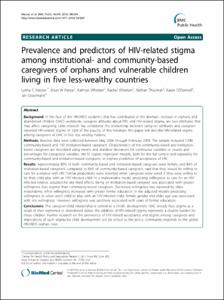 View / Download
153.1 Kb
Date
Authors
Messer, Lynne C
Pence, Brian W
Whetten, Kathryn
Whetten, Rachel
Thielman, Nathan
O'Donnell, Karen
Ostermann, Jan
Repository Usage Stats
256
views
207
downloads
Abstract
BACKGROUND: In the face of the HIV/AIDS epidemic that has contributed to the dramatic increase in orphans and abandoned children (OAC) worldwide, caregiver attitudes about HIV, and HIV-related stigma, are two attributes that may affect caregiving. Little research has considered the relationship between caregiver attributes and caregiver-reported HIV-related stigma. In light of the paucity of this literature, this paper will describe HIV-related stigma among caregivers of OAC in five less wealthy nations. METHODS: Baseline data were collected between May 2006 through February 2008. The sample included 1,480 community-based and 192 institution-based caregivers. Characteristics of the community-based and institution-based caregivers are described using means and standard deviations for continuous variables or counts and percentages for categorical variables. We fit logistic regression models, both for the full sample and separately for community-based and institution-based caregivers, to explore predictors of acceptance of HIV. RESULTS: Approximately 80% of both community-based and institution-based caregivers were female; and 84% of institution-based caregivers, compared to 66% of community-based caregivers, said that they would be willing to care for a relative with HIV. Similar proportions were reported when caregivers were asked if they were willing to let their child play with an HIV-infected child. In a multivariable model predicting willingness to care for an HIV-infected relative, adjusted for site fixed effects, being an institution-based caregiver was associated with greater willingness (less stigma) than community-based caregivers. Decreased willingness was reported by older respondents, while willingness increased with greater formal education. In the adjusted models predicting willingness to allow one's child to play with an HIV-infected child, female gender and older age was associated with less willingness. However, willingness was positively associated with years of formal education. CONCLUSIONS: The caregiver-child relationship is central to a child's development. OAC already face stigma as a result of their orphaned or abandoned status; the addition of HIV-related stigma represents a double burden for these children. Further research on the prevalence of HIV-related acceptance and stigma among caregivers and implications of such stigma for child development will be critical as the policy community responds to the global HIV/AIDS orphan crisis.
Type
Journal article
Subject
Adolescent
Adult
Caregivers
Child, Orphaned
Data Collection
Developing Countries
Female
HIV Infections
Health Personnel
Humans
Middle Aged
Prejudice
Young Adult
Permalink
https://hdl.handle.net/10161/5877
Published Version (Please cite this version)
10.1186/1471-2458-10-504
Publication Info
Messer, Lynne C; Pence, Brian W; Whetten, Kathryn; Whetten, Rachel; Thielman, Nathan; O'Donnell, Karen; & Ostermann, Jan (2010). Prevalence and predictors of HIV-related stigma among institutional- and community-based caregivers of orphans and vulnerable children living in five less-wealthy countries. BMC Public Health, 10. pp. 504. 10.1186/1471-2458-10-504. Retrieved from https://hdl.handle.net/10161/5877.
This is constructed from limited available data and may be imprecise. To cite this article, please review & use the official citation provided by the journal.
Collections
More Info
Show full item record

Adjunct Assistant Professor of Global Health
This author no longer has a Scholars@Duke profile, so the information shown here reflects their Duke status at the time this item was deposited.

Adjunct Associate Professor in the Department of Family Medicine and Community Health
Brian Wells Pence, PhD MPH, is trained as an infectious diseases epidemiologist. His research interests focus primarily on the impact of trauma, mental illness, and other psychosocial characteristics on HIV-related behaviors and clinical outcomes and on the development of effective and practical interventiosn to address mental illness in HIV patients. Professor of Medicine
Broadly, my research focuses on a range of clinical and social issues that affect persons living with or at risk for HIV infection in resource-poor settings. In Tanzania, our group is applying novel methods to optimize HIV testing uptake among high-risk groups. We recently demonstrated that the Discrete Choice Experiment (DCE), a form of stated preference survey research, is a robust tool for identifying (a) which characteristics of HIV testing options are most preferred by different populati Professor in the Sanford School of Public Policy
Director, Center for Health Policy and Inequalities ResearchResearch Director, Hart Fellows Program,Professor, Public Policy and Global Health Professor, Nursing and Community & Family Medicine Kathryn Whetten (PhD) is Chair of the Maternal, Adolescent and Child Health working group, and she is the Co-Chair of the University Diversity Task Force and the Sanford Diversity Committee. Kathryn Whetten is the Principal Investigator on
More Authors
Alphabetical list of authors with Scholars@Duke profiles.