Adorno's Advice: Minima Moralia and the Critique of Liberalism 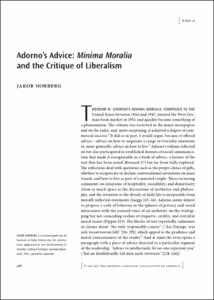 View / Download
171.2 Kb
Date
Author
Norberg, Jakob
Repository Usage Stats
462
views
820
downloads
Abstract
Adorno’s Minima Moralia was part of a publishing boom in the genre of advice literature in postwar West Germany. The combination of economic resurgence and attempted cultural restoration resulted in a widespread wish to master forming models of social intercourse; this craving for guidance accounts for the volume’s commercial success. But while Adorno participates in the culture of counseling, he couples practical suggestions with repeated announcements of the demise of the self-determining subject, the projected recipient of advice. He addresses problems that appear in the individual’s frame of attention but consistently disputes that this is a meaningful scene of action in the age of total administration. Minima Moralia both inhabits and violates the conventions of advice literature in order to dramatize the experience of the discrepancy between societal logic and the individual’s resources.
Type
Journal article
Subject
Adorno, Minima Moralia, Self-Help, Advice, Liberalism, Critique
Permalink
https://hdl.handle.net/10161/5879
Collections
More Info
Show full item record