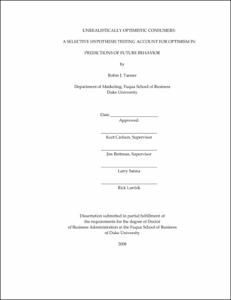 View / Download
462.6 Kb
Date
Author
Tanner, Robin James
Advisors
Carlson, Kurt
Bettman, Jim
Repository Usage Stats
566
views
562
downloads
Abstract
Individuals tend to make unrealistically optimistic self assessments about themselves and their future behavior. While little studied in marketing, unrealistic optimism by consumers may have negative consequences for both marketers and consumers. This dissertation proposes and explores a selective hypothesis testing view of unrealistic optimism. Specifically, I propose that consumers adopt the tentative hypothesis that they will behave in an ideal fashion when predicting their future behavior. They then selectively test this hypothesis by accessing information consistent with it, with the ultimate consequence being unrealistically optimistic predictions of future behavior. To validate this theory I use the following experimental paradigm. I have individuals first provide an idealized estimate for the behavior of interest (e.g., In an ideal world, how often would you exercise next week?) and then provide a second estimate (e.g., How often will you exercise next week?). The idea here is that by making the idealized nature of the ideal behavior salient consumers will be less likely to test a hypothesis of ideal behavior when subsequently providing an estimate. In a series of ten studies, I find that prior consideration of idealistic performance does indeed temper optimism in subsequent self-assessments (henceforth post-ideal estimates). Specifically, post-ideal estimates are free of relative optimism versus expectations of others behaviors, are more reflective of actual past behavior, and better predict actual future behavior. Furthermore, this attenuation of optimism is mediated by increased consideration of realistic thoughts and is moderated by both expertise and decisiveness. All of these results are consistent with selective hypothesis testing being a key driver of unrealistic optimism. Additionally I demonstrate that the debiasing effect of my method extends from behaviors to above average (and in some cases below average) views of traits and abilities. As such my work raises the possibility that selective hypothesis testing underlies a wide variety of self assessment biases. Having found strong support for my selective hypothesis testing view of unrealistic optimism, I also explore the potential consequences that unrealistic optimism may have for consumer decisions. In particular, I demonstrate that unrealistically optimistic predictions of future behavior appear to be associated with greater willingness to pay for socially desirable products (e.g., treadmills) and that attenuation of such optimism can reduce willingness to pay. Some researchers have argued that unrealistic optimism with respect to future behavior causes people to make vice choices in the present because they expect to make virtuous choices in the future (Kahn and Dhar 2007). If so, then the current research suggests one way to help consumers from falling into the trap of justifying vice behaviors with optimistically held views about future actions.
Type
Dissertation
Department
Business Administration
Subject
Business Administration, Management
Psychology, Social
Agriculture, Animal Culture and Nutrition
Permalink
https://hdl.handle.net/10161/590
Citation
Tanner, Robin James (2008). Unrealistically Optimistic Consumers: a Selective Hypothesis Testing Account for Optimism in Predictions of Future Behavior. Dissertation, Duke University. Retrieved from https://hdl.handle.net/10161/590.
Collections
More Info
Show full item record