Augmentation of cardiac contractility mediated by the human beta(3)-adrenergic receptor overexpressed in the hearts of transgenic mice. 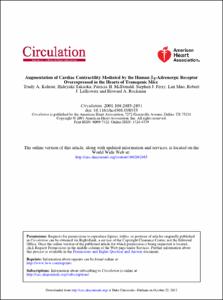 Assistant Professor in Medicine
I. Research: As the director of mouse physiology laboratory, in charge for the all events related with Dr. Howard Rockman's molecular biology laboratory studies needs. Participate in research in rodents model: Perform surgery and serve as co-investigator in studies on transgenic mice with heart failure. Develop models of hypertrophy in small animal using micro-surgical techniques (aortic constriction, left ventricular infarction and abdominal aortocaval fistula) and perform