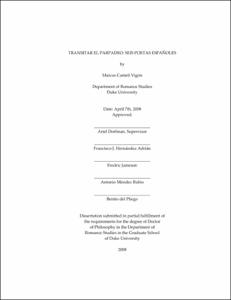 View / Download
1.0 Mb
Date
Author
Canteli Vigón, Marcos
Advisor
DORFMAN, ARIEL
Repository Usage Stats
525
views
2,837
downloads
Abstract
To traverse the blinking, Transitar el parpadeo, is to consider six poetries that seem invisible or at least blurred in current Spanish poetic contexts: José-Miguel Ullán, Carlos Piera, Pedro Provencio, Ildefonso Rodríguez, Olvido García Valdés, Miguel Casado. All of these poets start writing in a period strongly marked by the endings of francoism, and the beginnings of the democracy. The blinking refers to their apparitions and disappearances in general panoramas of Spanish poetry, but it also refers to something that bothers the eyes of most Spanish critics: their criticism is only able to see generations, replacements, and poetic hegemonies. To traverse the blinking is, thus, a question about the reason that their vision is so obstructed, and, at the same time, an attempt to really see these poets, which implies finding a new way of reading them. Since these poetics resist any form of closure, and, at the same time, they offer themselves as an invitation to mobility; we need to find theoretical approaches to reading that do not betray those resistances and preserve the trace of that traversing. This is why I have chosen to organize my dissertation in six chapters, each of them dealing with a poet, and I have concluded without properly or formally closing, but formulating some premises on how to keep crossing through those poetic visions. My conclusion is that categories such as strangeness, the foreign, exodus, and the border, would necessarily need to be acknowledged in order to start to make visible the foundations of these writings. I maintain that they reveal a tradition, long repressed during francoism and also during the first stages of a democratic transition based in a pact of forgetting, a tradition that these poets claim as theirs and which considers the avant-garde as a lineage that, not only cannot be waived, but should be reconsidered. Traversing them, thus, offers new insights on theoretical issues such as subjectivity, poetry's relation to thought, its formal limits, and the question about reality, while believing that language, by retaining its restlessness, continues to offer itself as a powerful tool of resistance and memory.
Type
Dissertation
Department
Literature
Subject
Literature, Romance
Literature, Modern
Literature, Romance
POETRY
SPAIN
HERMETISM
RESISTANCE
Permalink
https://hdl.handle.net/10161/591
Citation
Canteli Vigón, Marcos (2008). Transitar El Parpadeo: Seis Poetas Españoles. Dissertation, Duke University. Retrieved from https://hdl.handle.net/10161/591.
Collections
More Info
Show full item record