Can census data alone signal heterogeneity in the estimation of poverty maps? 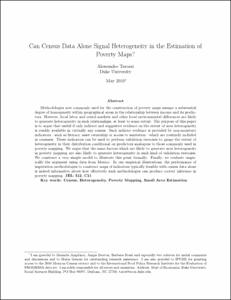 View / Download
548.2 Kb
Date
Author
Tarozzi, Alessandro
Repository Usage Stats
253
views
352
downloads
Abstract
Methodologies now commonly used for the construction of poverty maps assume a substantial degree of homogeneity within geographical areas in the relationship between income and its predictors. However, local labor and rental markets and other local environmental differences are likely to generate heterogeneity in such relationships, at least to some extent. The purpose of this paper is to argue that useful if only indirect and suggestive evidence on the extent of area heterogeneity is readily available in virtually any census. Such indirect evidence is provided by non-monetary indicators–such as literacy, asset ownership or access to sanitation–which are routinely included in censuses. These indicators can be used to perform validation exercises to gauge the extent of heterogeneity in their distribution conditional on predictors analogous to those commonly used in poverty mapping. We argue that the same factors which are likely to generate area heterogeneity in poverty mapping are also likely to generate heterogeneity in such kind of validation exercises. We construct a very simple model to illustrate this point formally. Finally, we evaluate empirically the argument using data from Mexico. In our empirical illustrations, the performance of imputation methodologies to construct maps of indicators typically feasible with census data alone is indeed informative about how effectively such methodologies can produce correct inference in poverty mapping.
Type
Journal article
Subject
Census
Heterogeneity
Poverty mapping
Small area estimation
Permalink
https://hdl.handle.net/10161/5913
Published Version (Please cite this version)
10.1016/j.jdeveco.2010.05.003
Citation
Tarozzi, A. (2011). "Can census data alone signal heterogeneity in the estimation of poverty maps?" Journal of Development Economics 95(2): 170-185.
Collections
More Info
Show full item record